I now know what it would be like to play snooker against Sir Neville Francis Fitzgerald Chamberlain. This was reality….turning up to a Cyclocross Race, designed and built by the guy that invented Cyclocross. True story. Check Wikipiedia if you want proof (and hopefully my witty update will still be there)…….

Last years course was a corker, therefore expectation levels were at Everest altitude…….steps……DJ Jazzy Jez……Mexican Wrestling Masks…..Chips with well hot sauce….and of course Spraggsy and the top KWheelers crew….love all those guys. So it begs the question, why change it.

Well they didn’t they just improved it:

OK, lets start with the lead up. it wasn’t the norm VB team bus journey, VB wannabe but current EQV minion Ed Catfood hitched a lift in the bus with daughter Megs, heading back to Bedfont which saw her CX Race debut in 2017. The journey started at dawns crack it was still dark and the weather was borderline biblical…..I was excited….the kids were dang-right disgusted.

Just a quick note on the baños químicos. There’s nothing worse than no bog-blog material…but they were decent, flushable, near the start / finish and well stock with quilted papier. Lets just cut the crap and dump the gags…..not fanny anymore.

On to the racing. The kids races were slick, no waiting around, a few course changes but all that went well, clearly a precise and concise briefing was held, Spraggsy leaves no-body behind!. They clearly had the best conditions of the day. Some great racing out there.

Next up saw Molli representing Velobants (as her 87th claim). The course was changing by the minute, and a swift downpour really saw the bends cut in, it was getting tricky. She was unlucky though, as she clearly had a puncture with 400 yds to go…..but would you believe it, the leading youth, Joel C was swift to pass her just before the finish line and offer his assistance post celebrations. ;O) Phew, that was lucky !

One uber positive note bene to raise……this year has been like no other in regards to images from the day, not just race snaps, but also those that catch you unaware looking au natural. The lines of un-tapped beauty, the longing concentrated gaze on the start line…..then ones like this:

But seriously, we have literally thousands of great pics from Keith, Garry, Molli and others that are all posted for us to look through…..never has our trap time been so employed. But thank you, as it’s a thankless task, us being so photogenic and all.

Crowds were now starting to gather at the V-Bus. Bike racks full, numbers being pinned on to the closest pair of buttocks that can be found, Redbull being consumed, and the most entertaining of all……the “Tyre Pinch”

We LOVE the “Tyre Pinch”……the action is so simple, but time literally stands still for the owner of said tyre, whilst the pinch is complete, and the pincher then moves to deliver their professional, unequivocal response.

What happens next is the key to boosting or genuinely destroying race confidence in a rider. Like a semi-skilled labourer sucking through their teeth whilst quoting for a plastering job, it’s not so much the pinch….it’s the reaction.

Retorts such as “Oooooohh they feel REAL low”……or the eye brow raise followed by the high pitched… “hmmm”.

No idea of the rider weight, skills, appetite for stackage…..the ‘pincher’ can make or brake the rider through a rubberised level of physiological warfare.

There is also never just 1 pinch in a 12 square foot area…..it’s like yawning, once you see someone yawning its virtually impossible not to yawn yourself.

Ipso facto….you pinch your own tyre….again, probably for the 24th time whilst waiting around on your bike; ergo – challenging the thought of what you previously considered would be appropriate pressure to be correct. Anyhow….needless to say whilst hanging around we all checked our own tyres about 10 times on Sunday and added a little…….let a little out….blah blah……it’s like the golfer’s twitch before a long drive….all part of the pre-race process.

To make things a little more accurate…we have scienced the shi*t out of this habbit at the V-Bus…..we’ve invested in a digital track pump (with a wooden handle) . OMG…this thing is the bomb. You want 26.2psi…..you got it……27.8 pounds per square idiot…..yep we can deliver that right to your presta.   Boooyakasha!!

Suited and booted, a few new faces hanging around, we saw the Acid House flag go up and heading on over to go mental. By this time it was about 10:50, the rain was getting a little stronger so it was perfect time for a sighting lap……not that you could see a lot as the drizzle was grim. The off-camber climb from the finish line was great, although we wouldn’t see that until the end of Lap 1 as the start through us straight up to the pits like last year. Giving the 100 strong herd a chance to thin out. The steps were still in, although noticeably few less people trying to ride them in the conditions…..apart from the ….Mountain Bikers. Riding up them was as easy as….well….riding up shallow steps on a bike with front suspension, a HUGE front wheel and lots of volume…..(prob 35.6psi). Only kidding ;o)

So onto the gridding. At exactly 11:14 the heavens opened….Literally as Kelvin raised his clip board full off names of 40 year so-and-sos the rain upped its game.

The VB grid population was a little bigger than yooj…..7 in totes……Tommo, PFitzP, Kevvo, Marti, Pat, Pogo and Jason….yep you read it right…..the Keenor is now keen…..plus he was gridded surprisingly high…..bribe to KP we know was paid. Non BobC this week, he’s off sunning it in Mallorca – which opened the door for the latest contender for the Great CX Bake Off….this week’s new entrants: Swiss-Family Keenor and my didn’t they do well??

There is no end to VB merch.

Gridding was relatively slick……getting the timing system to work…..not-so-much. It felt like about 10 mins waiting in the sheeting rain until 73% of the field was shivering and just about the chorus of teeth chattering it was declared “You will go in the next 30 seconds” – finally Dennis had turned the timing system off then on again.

Go-time! Woosh, a steamin (literally) herd of wilderbeast set off on the charge. It seemed marginally less chaotic that usual but with some semi-pro gridding for Tommo the triple-threat-VB charge wasn’t possible. Instead it was just a 2-ball VB wrecking crew of Kevvo and Marti with Team MK’s very own man of steel GoJonnyGo for course clearance ahead.  Awsome tactic which failed to account for the person in front of GoJonnyGo forgetting to actually start.

Right at the spot where was 1st lap fracas last year, Tommo found himself being this weeks #thatguy and having to pull over to shout, we mean, fix his bike. Meanwhile the herd roared on through the open and switchy switchy bends, amazingly incident-free on first ascent of the steps, in to the grid-o-doom. By now rain was on biblical level 5. No 2nd set of hurdles this year before the #weeclimb, they are still at the menders so there was more momentum in to #weeclimb but it was clearly going to get choppy as the rain ratcheted up to biblical level 6.

Over the hill and far away, down and up on to the path, toity toity bend – VB chuckle every lap when we see peeps with a foot out for this turn. Really? Rain had gone to biblical level 9 by this point and what was ‘fast chance saloon flatty bit’ a became A River Runs Through It in a matter of 4.5 nano seconds. Yay it was properly gonna be a dirty one today…

Then before you know it it was VB corner, well not until you had crossed another path. Which was we though, kinda obvious that the course went straight on over path….well not for all….shout out to High Wycombe’s Posterboy MarioChipplinio in the V50s who was obvs so focused on head down effort that he must had been using the tape as a course guide, saw the break in tape so began heading to Terminal 5….Good job the Team VB fanzone was so vigilant otherwise he was gone!

Bants Corner was adjacent to ze hurdles then it was the sloggy bends to the end, passed DJ Jazzy Jez and the tekkers zone; off camber, up camber, down camber, camber-camber and mud everywhere. #ChrisMonts must have seen around 376 non-graceful face plants in this section. At least.

Then it was back on for another lap. Somehow what seemed like a monster long course was shorter this year or maybe just VB is faster??

Away from the racing itself we have wondered for years about this and finally the proof is here. Has anyone ever actually seen speedy-beardy Neil and SD-beardy Jonesy in the same place……seriously…..they are the same person…..see with your own eyes!

Back to the racing? ok, if we have to. Quick summary; RAF’s KayJ was actually flying this week and edged out the win, called in by DJ Jazzy Jez so that those of us still on the course could hear it. Awesome, although is slightly disheartening when you work out they are done and you have 9/10ths of the lap still to go….

Despite his shout-at-bike incident on lap 1 that bumped him to the back of the pack Tommo’s new regime of not-actually-chucking-money-at-it (it’ll never last) is paying off and he charged through the field to again lead home Team VB, Kevvo lapped up the squirmy conditions to outperfom his gridding and some, Marti also enjoyed home mud conditions close behind, then it was a VB flurry of PfitzP, Pat, Jase, Pogo . That’s right, JayK saw out his first race finish in the modern era. He’s back. Although with some work to do to ever reclaim top spot of fastest lap time in his own house.

Post-race the traditional bants-mortem of race analysis was delayed as Spraggsy had laid on an official race bike-bath at the finish so there was a procession of V40s going from finish line to the shoreline. With at least a centimetre of water already in each shoe what was a few more going to matter, so in we jumped to Lake Sprag to wash our shoes, legs and race whips! 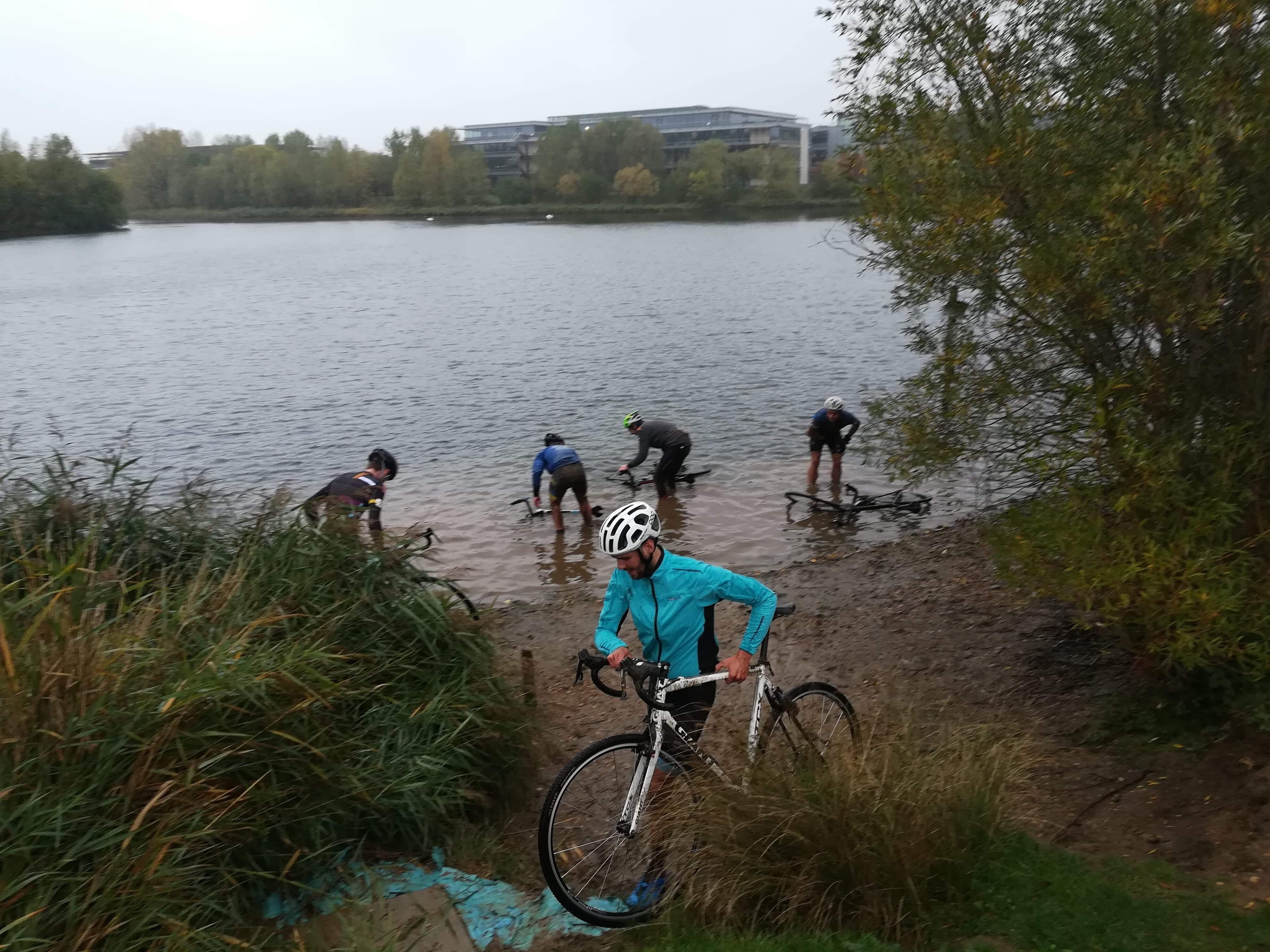 We have never left a venue with cleaner bike! No wonder the pre-match edict was that petrol washers were banned, you didn’t need one. Rumours were circulating of some disgruntled riders launching their bikes on a one-way journey to the bottom of Lake Spragg….probs one of those many, many multi milllionaire V50s no doubt. – “Pfft bike’s dirty, may as well chuck it and get a new one, i’ll take off my £450 pedals first obvs….”

Shout outs to Team Berkshire Tri Squad. Norms they only stick to triple-sporting action but with a prescription written out by Dr Bants a few new faces took to the CX startline for the first (and not last time). Top job to Dad n Lad Titley, April Edwards and a return for Chris D for all Getting. It. Done.

But wait, what’s this?  Just in from the pigeon carrier, news has just reached us that while we Central Leaguers were being partially drowned while racing, the sun was out in Scotland! Not only that, Team VB International Branch Rider #GForce was (literally) smashing podiums again.

Yes #GForce was in action in some (legit) MTB racing and should those fast kiddies a clean pair of 26s, that’s right – keeping it real while the racing whip is at the menders, even had time to try and emulate Tommo with some tailwhipping….but just couldn’t land it as badly.

Well that was that, another week of nonsense for Team VB.

Next week it’s back to the Hemel Hill where apparently everything that everyone previously complained about has been changed. Apart from the hill itself.

See you all there, in the mean time go long…. 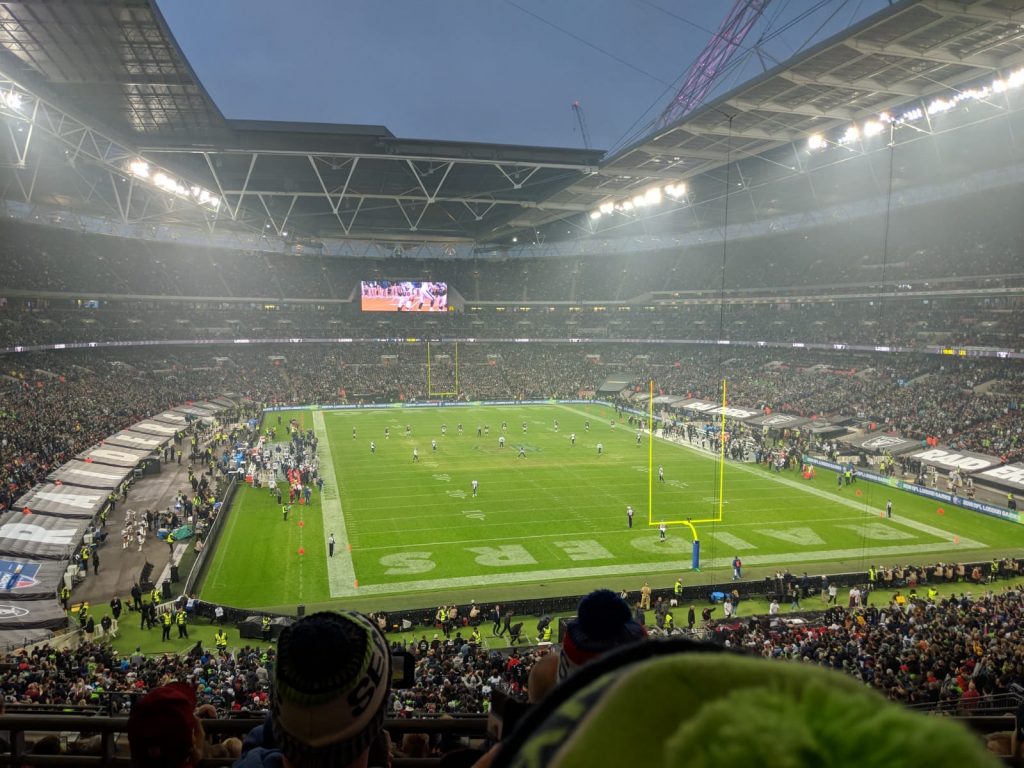