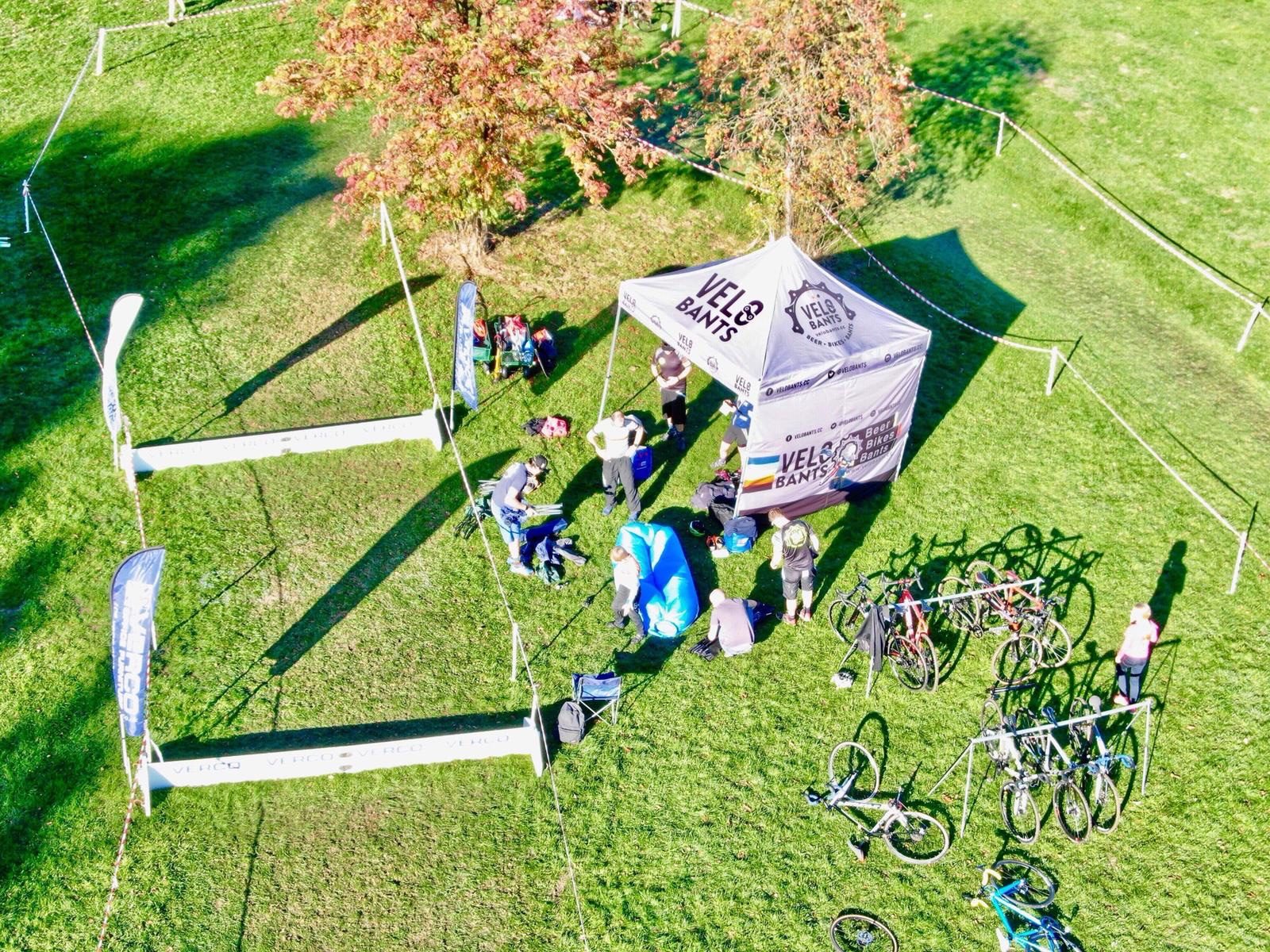 Your Blog will continue after this advert:

Totes Merch dump: we are looking to order some VB Velopacs, If anyone wants one for £22 let us know. (We aint making any moolar on these) We need to meet an MOQ of 25 and with only a few members with short arms and long pockets we are struggling to get to 25. Order now, arrive for X-mas. Who wouldn’t want this for X-mas!!?? 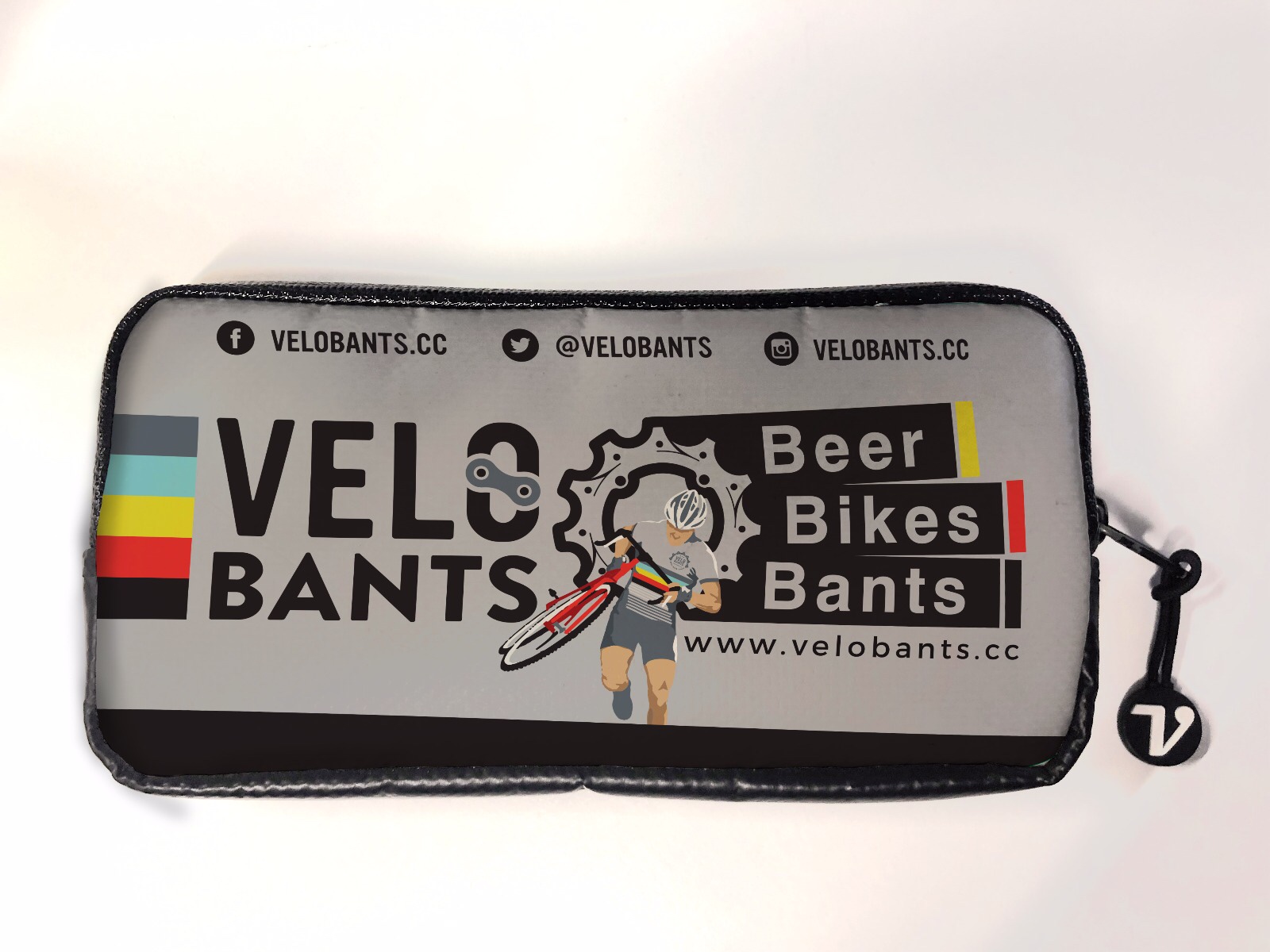 Anyhow, back to it.

The Hemel was always a thorn in the side of Marti and Tommo after hurdle gate 2016. The mental scares still visible on Tommos head…..and Martis never been the same. (Marti is under there somewhere) 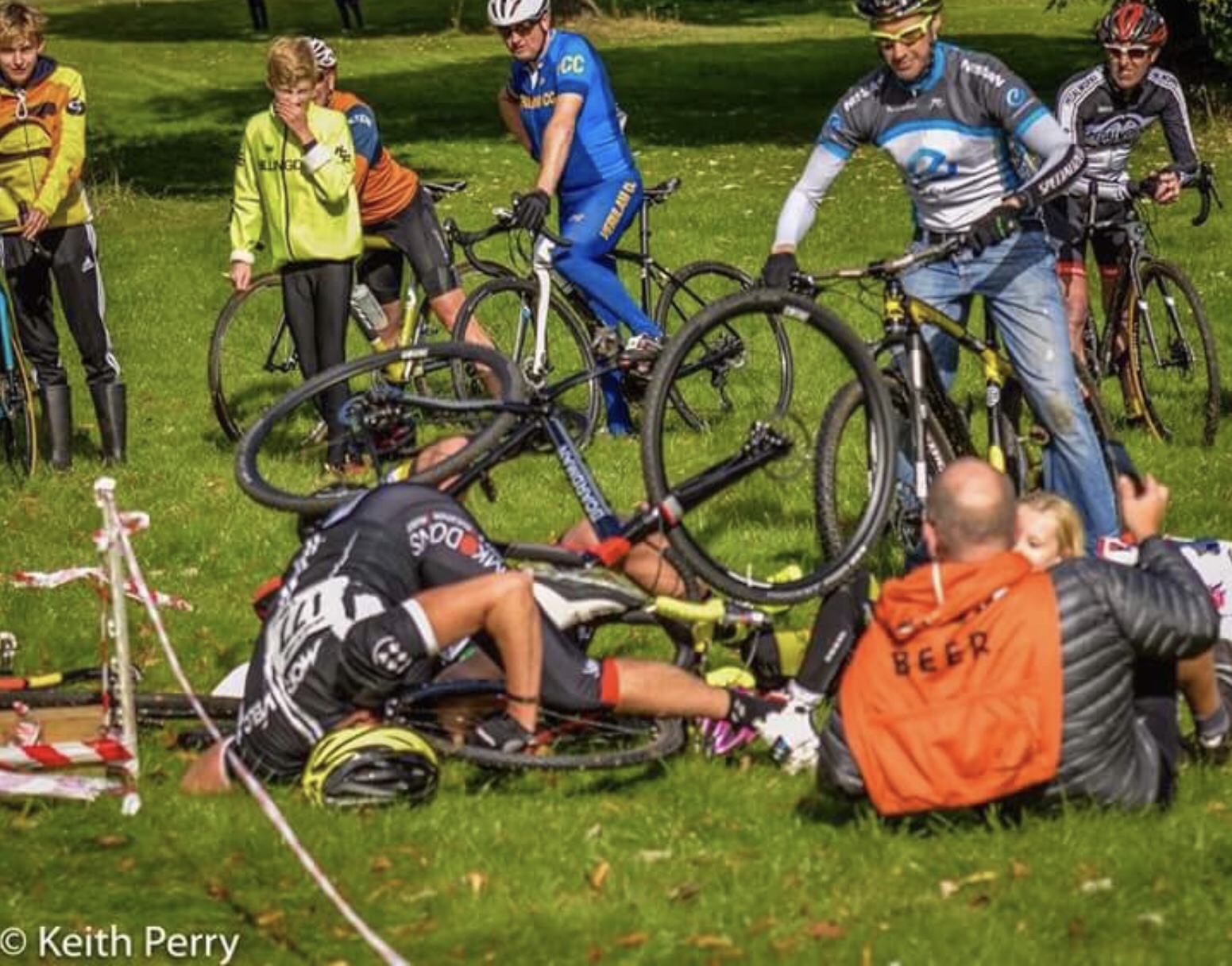 This year it was going to be different….the Andy Gumps had been re-load-cated…..sign on was by the finish line…..and the hurdles were no longer the size of 10 playing cards….what could possibly go wrong!  Insert “eeek” emoji.

Bigger news for the race was that the Team VB pop-up had arrived. Designed by the talented Lee Sharples off of Blue Cube Creative, the brains behind the VB artwork. It looked even bigger in the flesh, and obviously a LOT LOT bigger when popping the thing up. Loading the van is now like a huge game of CX Tetris; 6 x bikes, 2 x trolleys, 3 x bike stands, feather flags, power up signs, children, the baking…..phew. So we arrived early, no sweat getting the van under the barrier, we had at least 5mm to spare.

Then it was the epic task of getting all of the above over to the “SPOT”. It was a little shaky for Kevvo passing the spot where his Mum snapped her legs in 3 places last year…..he powered on through.

Getting the kit there definitely took longer than the erection (ha ha ha you said erection). We’re pretty well drilled at getting the paraphernalia up and running. We thought it looked ace…even better from Gaz’s drone. 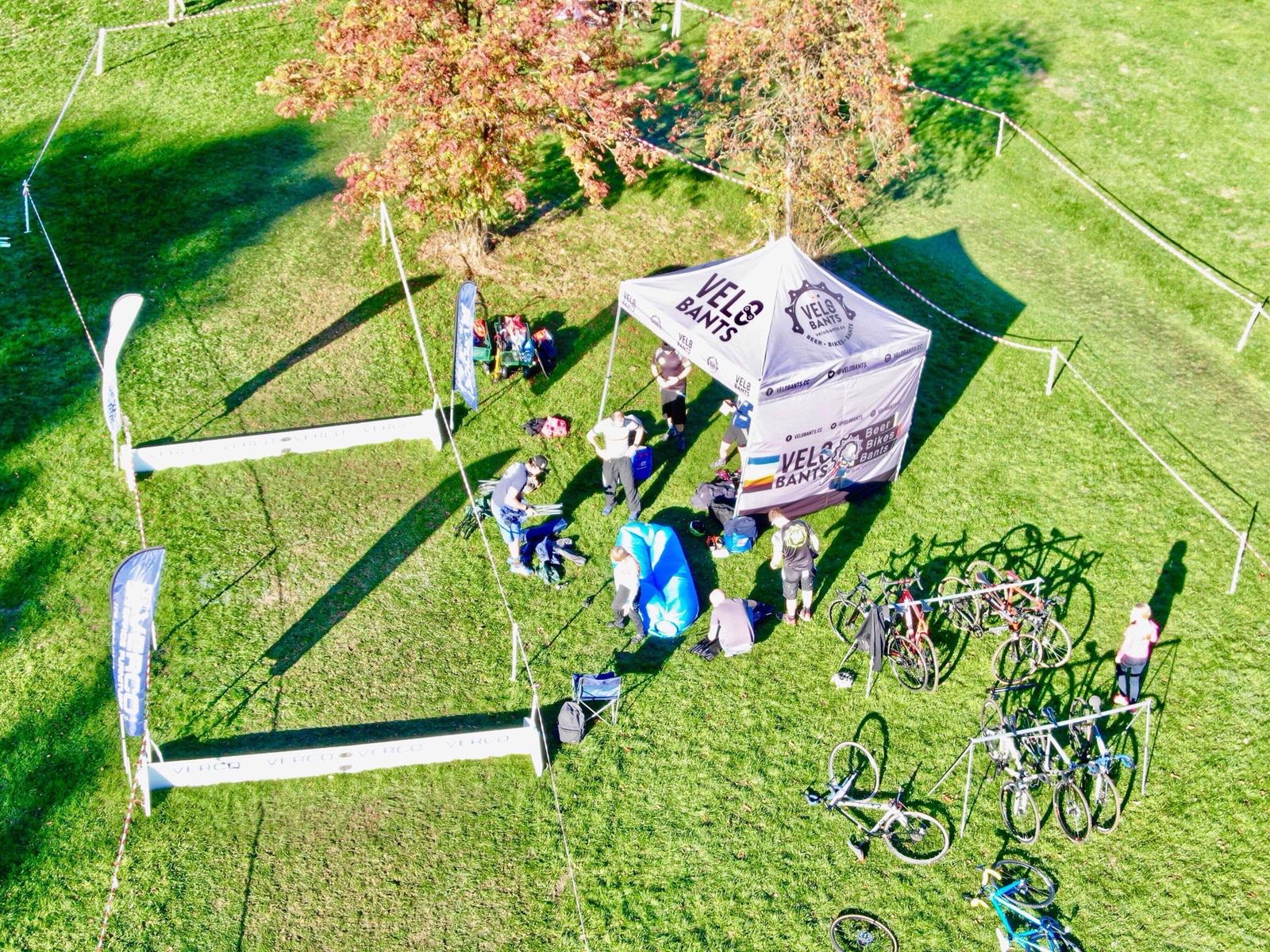 We do like a good spot. Getting in and setting up early is all part of the build up for us, it def helps take the edge off the nerves you get from thinking about racing. C’mon everyone must get a little nervous.

I’m sure even the likes of Neil and Kieran still get nervous. Squadron Commander Wing Captain Kieran once told me that flying a Harrier Sea King at the speed of sound is nothing compared to being on the start line next to #MarkCalv (thats a lie)/ OK maybe its just me being next to the Charriot that does it for me ;o)

Does anybody know where the Hashtag key is on a Mac !….I literally have to Google “hashtag” then copy it….every flippin week !

It was a spectacular VB turn out. Appearances from Pat, Jase, Tommo, Marti, Kevvo, Pogo (Or Pongo as Fran always says) , DRB and PFitzP.

Bobley was sunning it in Mallorca, Fitzy was working, or was it the OPEN Owners Club doo in Sicily !?. Anyhow, a good gridding spread, Tommo leading the charge, Poggo pushing up the rear. Top bombing.

Tommo was out in the smoke until 3:30 so a hugeous hangover was expected…..Kev drove the van so it seemed serious.

Just before we started pinning numbers on each others butts we managed this gem hashtag:dreamboats 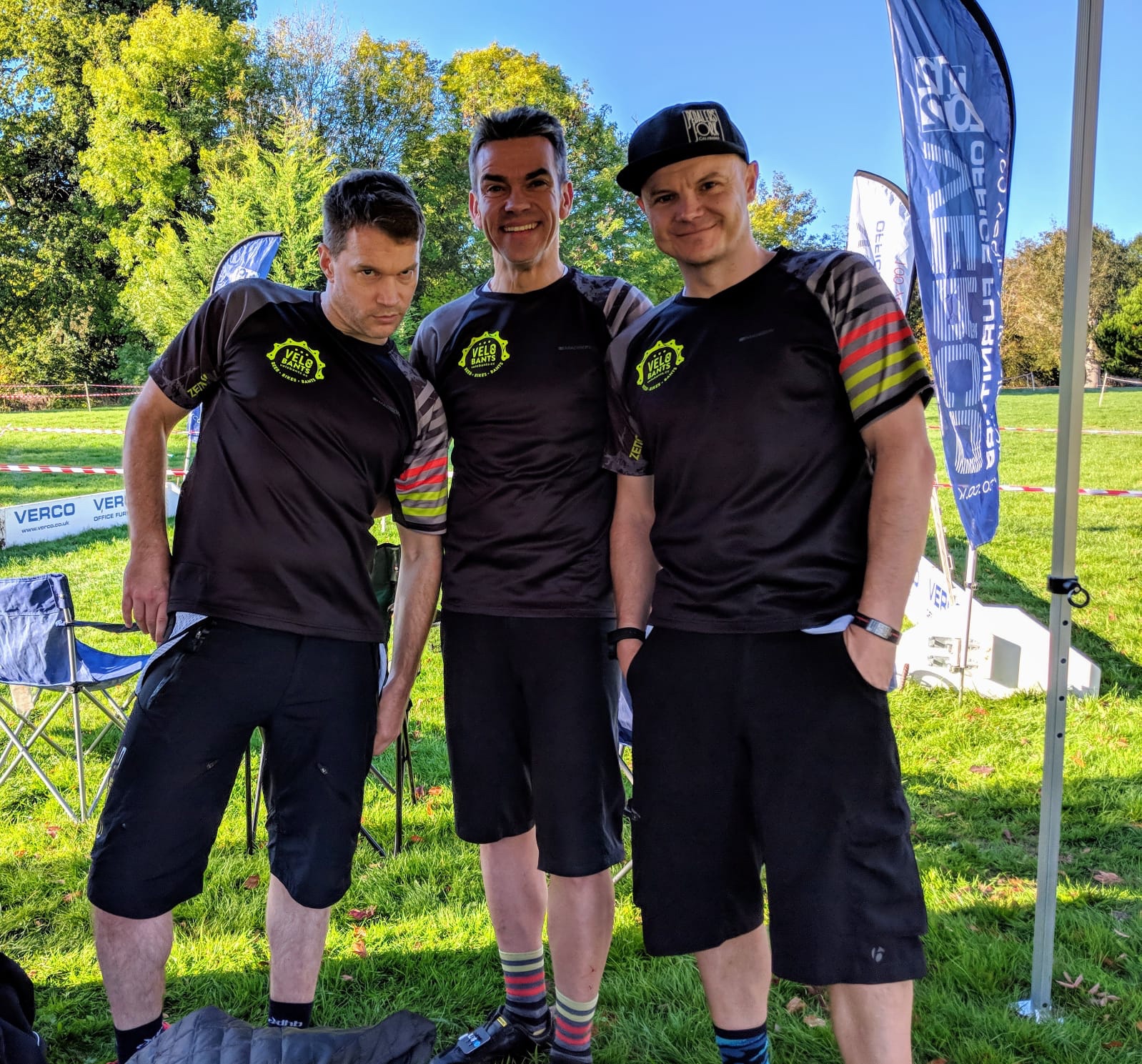 The start was standard, although to make things even worse…..we were told we would be climbing the entire hill on lap 1. UUrrghhh…..

Anyhow, for the purpose of speed and haste, it was a tough race, the hill seemed to get steeper every lap, the corners were great, you could gamble with speed relying on the science of tyre pressures or take them a little easier and confidently ride away. There were a few tumbles,#MBaisch took one for the team. A surprisingly good start for Catford opened up a channel for Tommo, didnt help as he went backwards on the climb, plus Po(n)go had a flyer and saw himself making up 10s of places in the space of a Belgium Frites van queue. Good work.

So other than that non eventful, Tommo didn’t puke, Jase just gave up; think he got bored, Marti got a flat and Pogo just smiled the whole way round as usual, generally finishing close to the gridded numbers we were dealt, so props to Keith for getting it close this week.

We hung around as usually with bells and horns, accompanying swongsong from the High Wycombe possie….good to go at it with those boys, albeit until a HWRC injury stopped play by the hurdles…..to be honest I think she was just overwhelmed with Pats strip-teaze and wanted to stop !

We did catch this top video…..man they make it look easy…..

Round 7 – The Buzz – Cedars School

Next up Round 7…..can you believe it we are nearly half way through the season….wowzers.

With only a few racing we thought we would go low key this week with a splash and dash and try to get home at a reasonable time for Sunday lunch, as it turned out we stayed for a bit to cheer on the la fem raceurs.

Off we all popped once the whistle had gone….#MCalv however went on the “F’ of “F*&k me that was quick” Linford Christie stylie……and seemed to get to the first corner before Pogo had even got moving…..great start !!!

The course was similar to 2017, a few dog legs thrown in, one set less of the hurdles, and the twisties through the trees removed. It was quick, even the rain from Saturday night didn’t really have any effect, cracks were still in the dry turf in the far corner by the pits.

It was around 6 minute laps for the norms, sub 5 for the fasties. There were some great RwR (races within race – technical term – Google it). Kevvo, DuncG, #JMild, Spraggsy, ChrisM, LeeS, all battling for the same spot. Spraggsy and his TT thighs were showing them who was boss on the straights….and there were a few of those for the others to hold on to. Tommo and Bucko were seen holding hands for 3 laps, seemingly joined at the hip. Shortly followed by Chringle off of Bicester and #DTSS (Dean Taylor Single Speed guy) with nose bags of talent shown from the Charriot and #MBaisch disappearing into the distance. The EQV lot were all Top 20, Cannings clearly sand bagging for the last 4 races as he had a stormer and GlenMc pulling off a win…..although he must of stolen the timing matt !

The womens race was a stonker this week, some really good battles going on between Charlotte, Karen, Fran et al. It looked epic. The Good Vibes girls were well turned out as ever, bike envy all round at Team VB….Vicious look A M A Z I N G in that kit……

Team MK turned up in numbers; Lisa, Jeni, Chrissie, Max, Nicole, Lucy, Rachael, Jen, Gillian and Natasha. Plus, it cant go without a mention, the representin from KateR (Dr Bants), improving every week, flying at the Buzz, top job.

Great effort from LBRCC, similar to other clubs, they aren’t a huge club, but they work with what they have and still manage to produce a great days racing. Great effort all.

I’m not sure what Darren enjoyed more form the day, the fact his club were putting on a great race…..or the fact he had a radio and called himself Rubber Duck…..breaker breaker 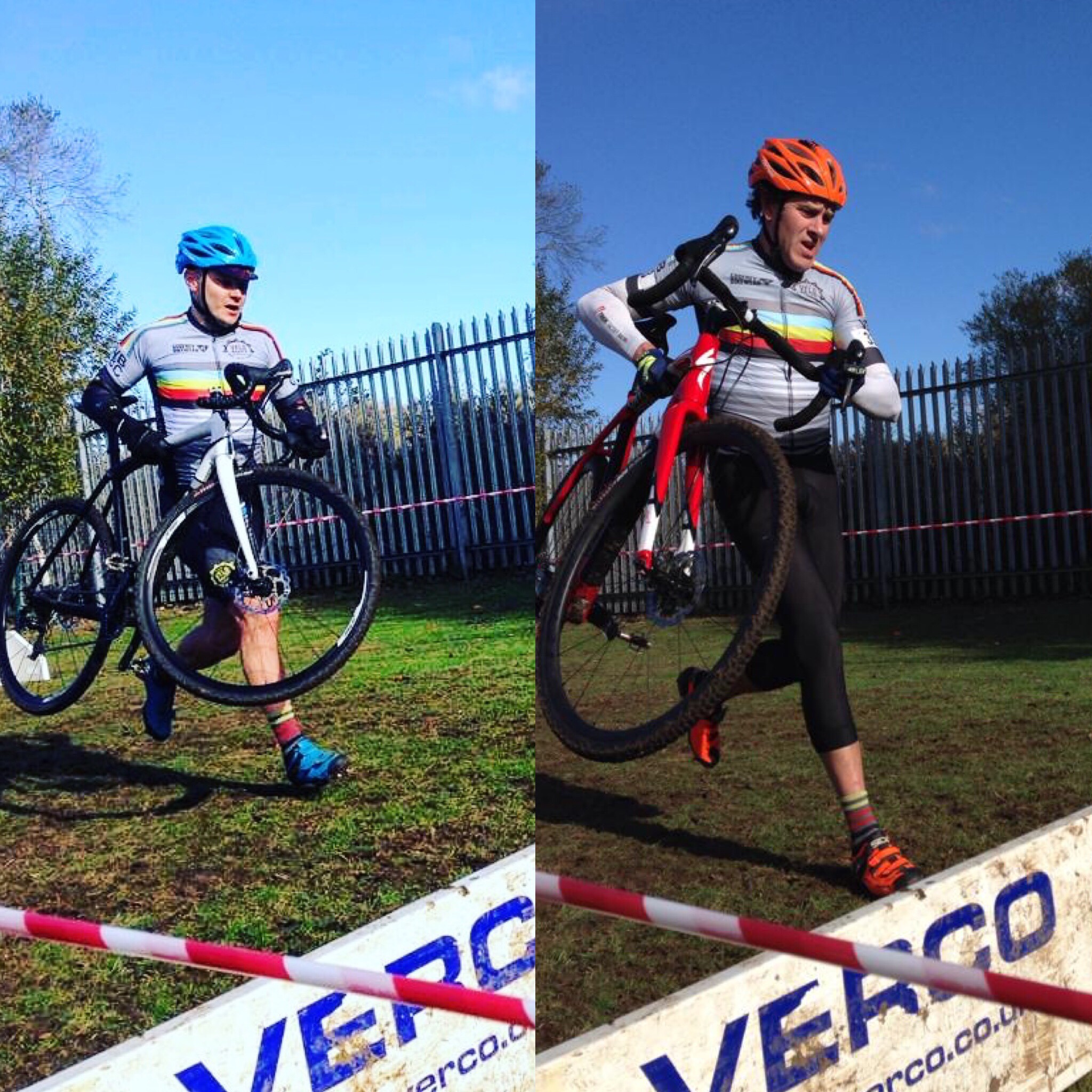 Whilst watching the womens race Kev managed to bag some Sagan 100% Sunnies. And yes she did look pretty cool dropping these off…..so pro ! (We still have these by the way Good Vibes Girl) 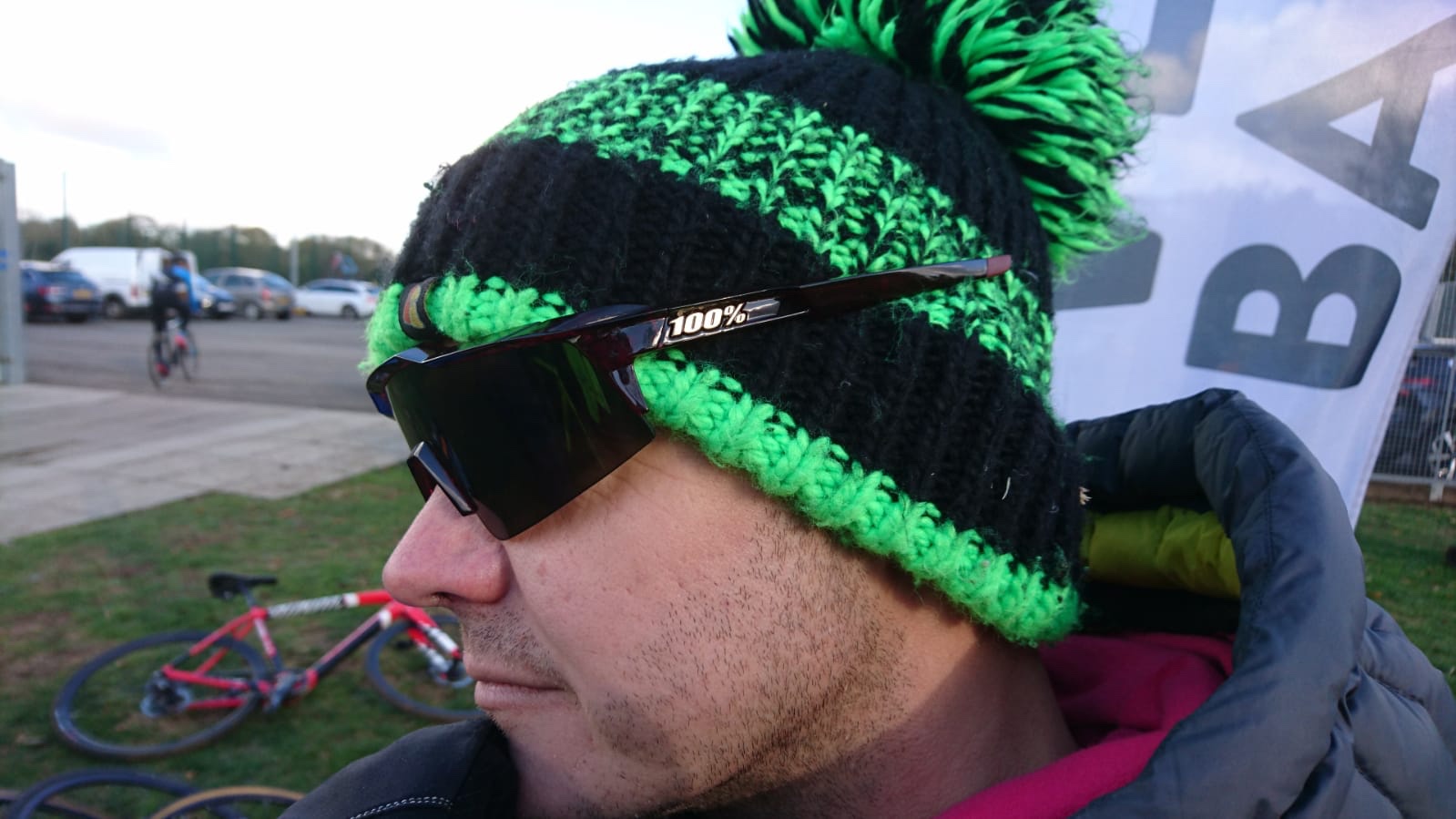 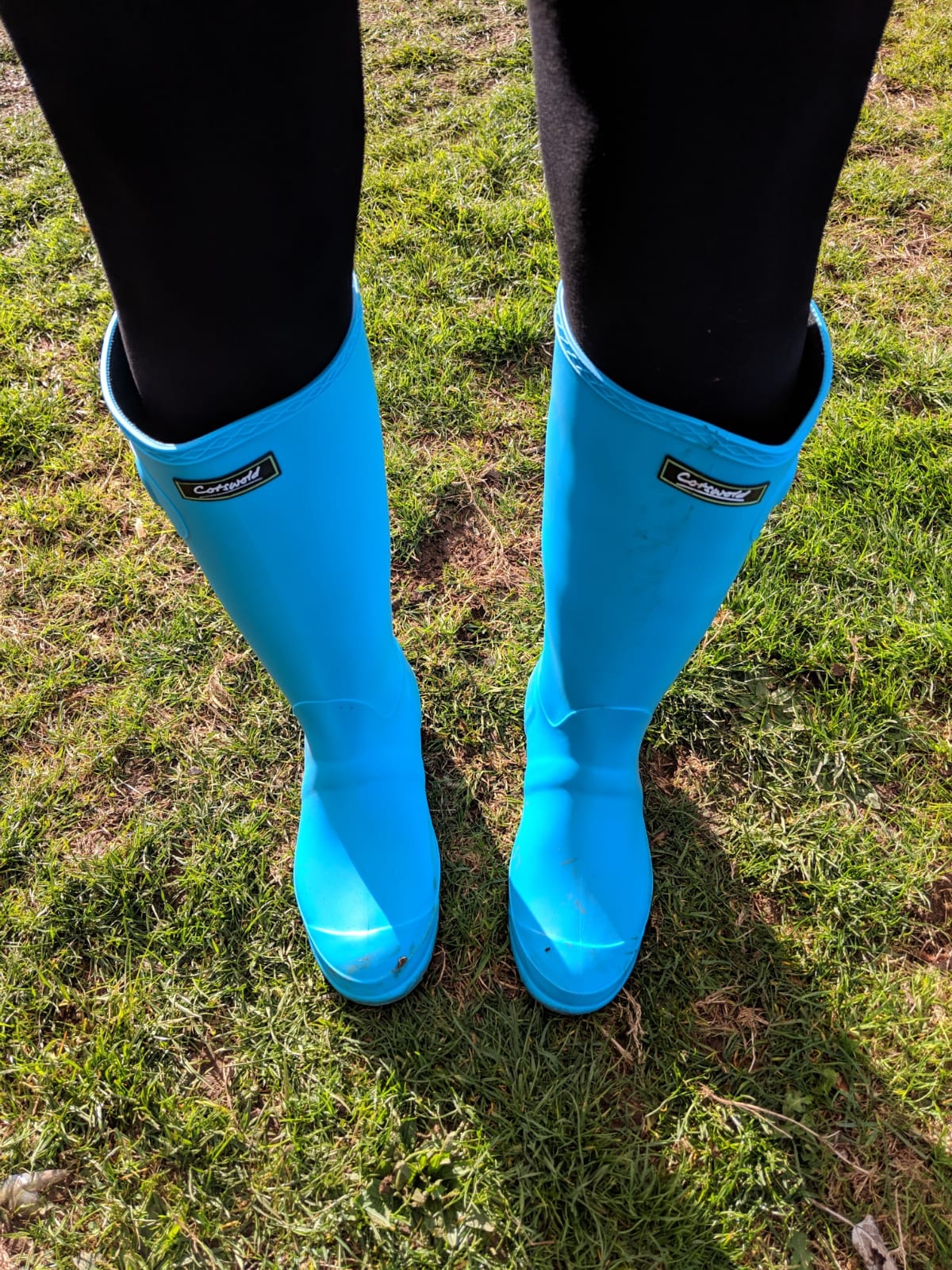 In case you forgot ! Those are Jase’s chinos….he wasn’t wearing kit you….as he didn’t race….not sure why!? 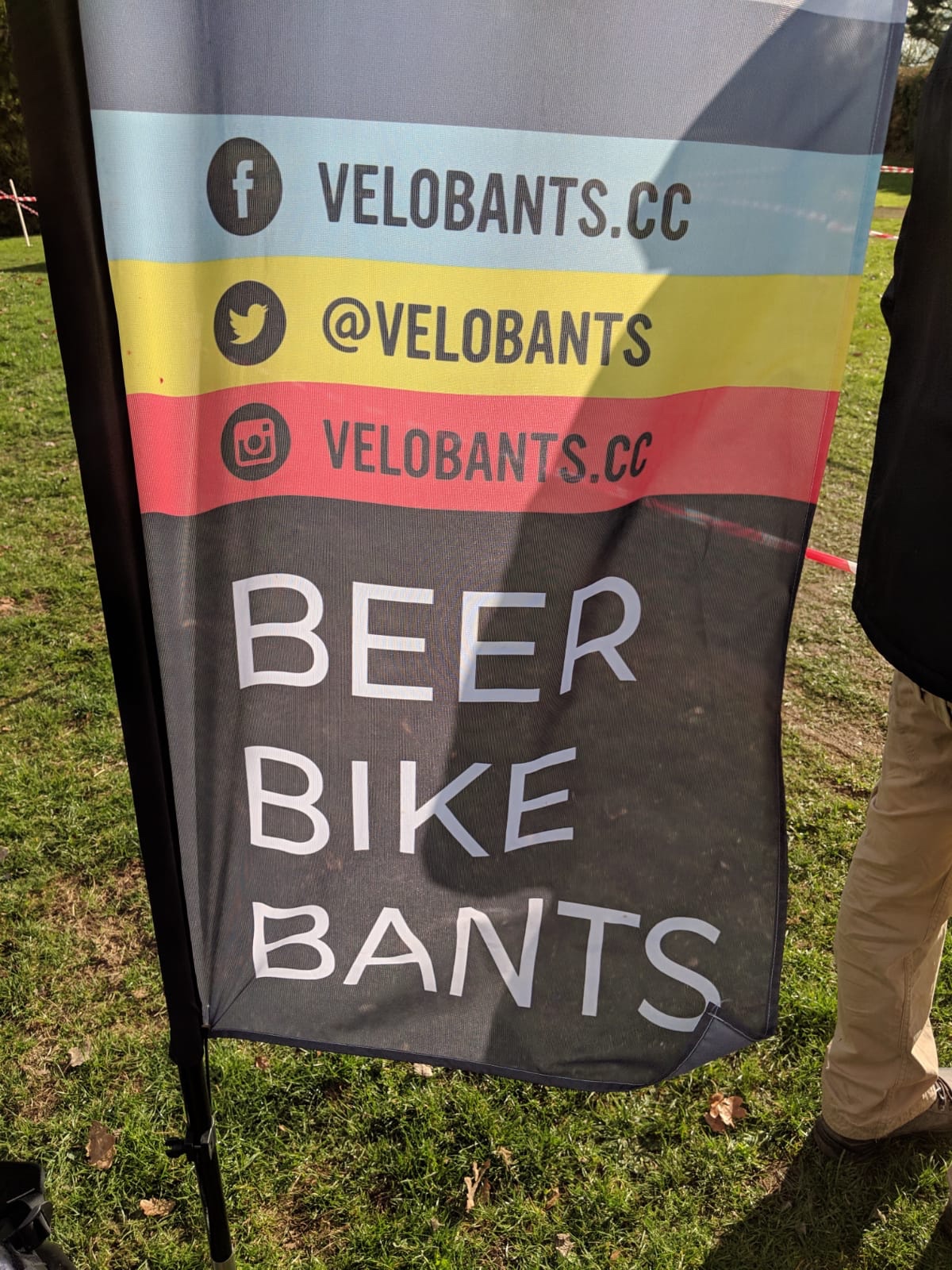 Plus a great cheeky vid of PFitzP inflating the sofa……or as we like to call it the ‘Le Blue Vagina’. (Thats the proper not-rude and vulgar word for it….Dr Bants told us!) 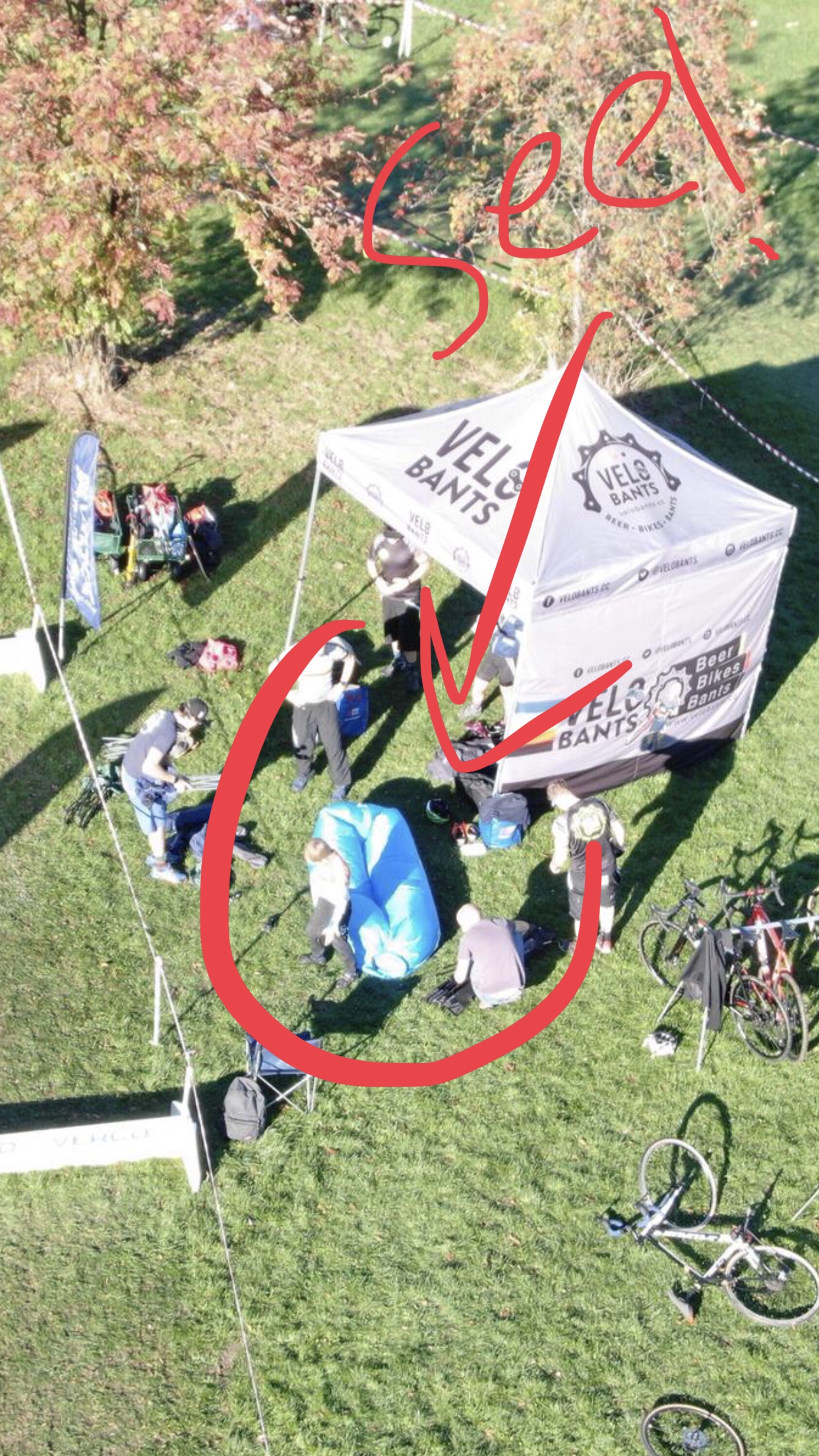 On a more serious note……

Molli, off of Velobants Youth Race Squid and photography fame is uber excited about a trip she is planning in 2020 travelling to Borneo, Indonesia and volunteering in local schools and generally doing lots of top helpful stuff for people less fortunate than us. She needs to raise 4Gs. Other than selling Class A drugs to teenagers this is going to be extremely difficult, so we are doing everything to help.

For the foreseable future, the “Bike Racks and Beers” will have a tin in the vicinity, if you grab a beer or grab a bike space throw a few shillings in the tin for Molli. (GlenMc we are expecting nothing but paper from you ;o)

We will also have the tin next to the hurdles, so if you’re having a shit race and want an excuse to stop (like Jase did at Hemel) always carry a 50p in your jersey pocket, then you can pull out the tape, drop your 50p in and get carried away discussing said trip with Molli until the race is over !