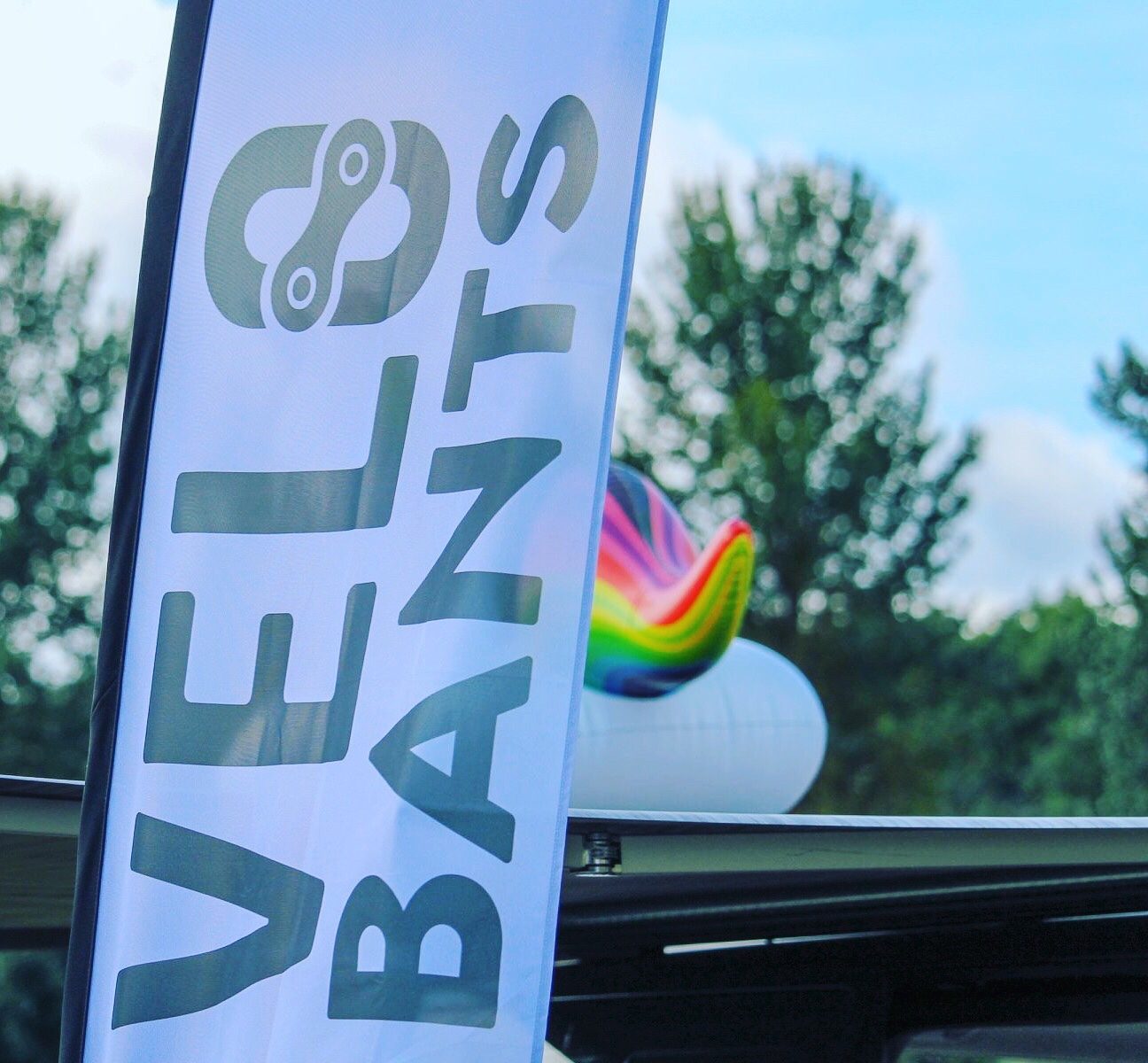 Whadda mean where have we been?? In our defence we’ve had a few things on our plate of late, apologies….but luckily for us at VB towers our #CXITC race has been delivered….slightly above average…..so we can now relax back to delivering the standard issue race reports, banter and of weekly round-up of poop boxes !

OK so since May this is what we’ve been up to in images: 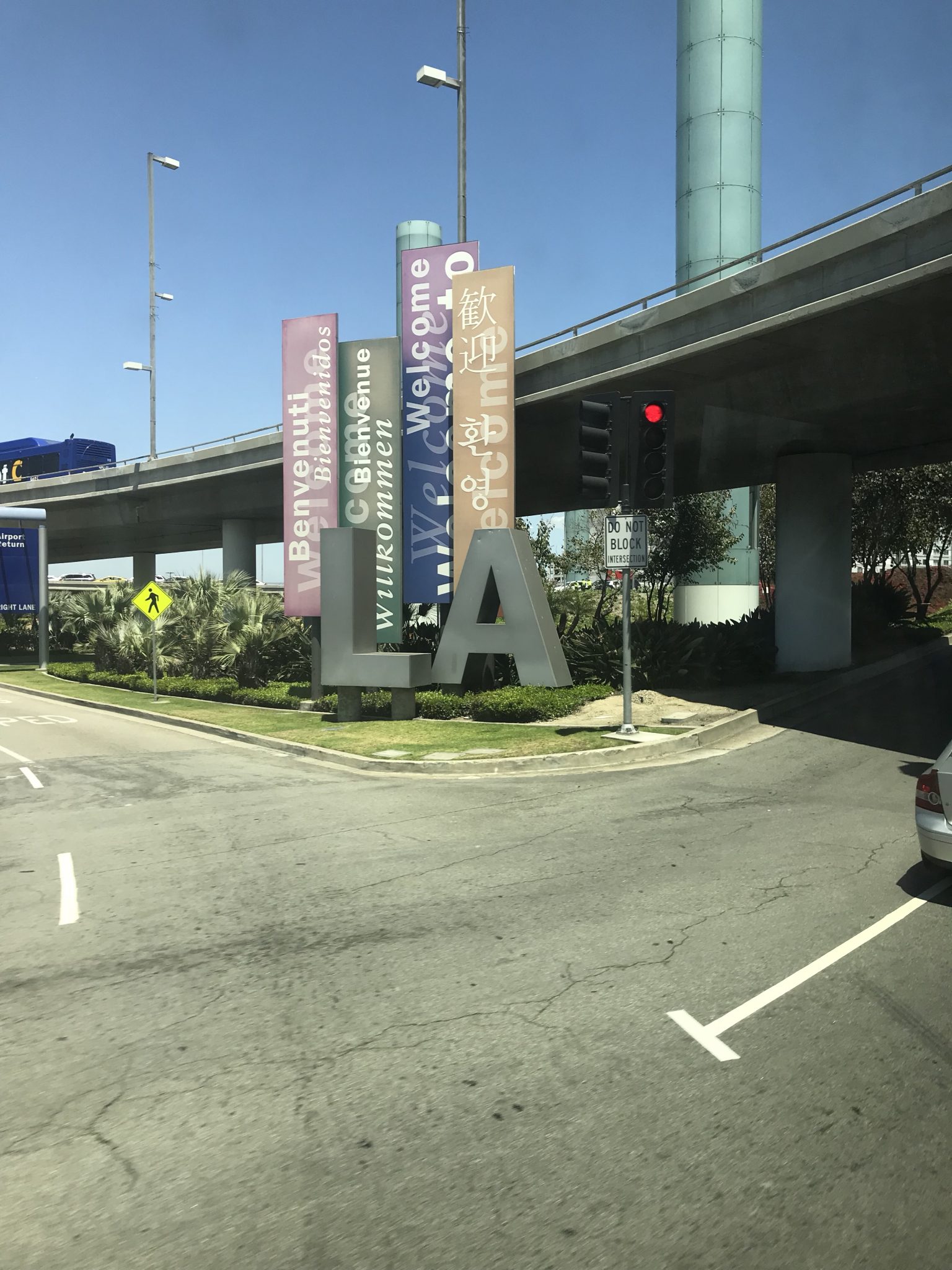 MTB road trip to LA to see Dave aka DC (US VB Member), raced in the Friday Night Summer Series, did particularly well at a Rodeo Bull competition in Calabassas, rode with Mark Weber, bought a new van, Gaz podium’d in MTBXC-Scotlandshire Division, Kev has a new job, Fitzy is 99% closer to moving to Woburn Sands, Molli got drunk on IPA, Jase is back racing – FACT, Pat aka Crashy Guy is back….generally just on a bike, Fitzy, Gaz & Kev went to some Scottish island to take on Grinnnnnddddduuuuuurrrrrrrro – Tommo didn’t want to go so he pretends like this EVENT OF THE YEAR never even happened – try to  ask him about it and find out for yourself!, (VB new signings) Kate and Paul have won tri-stuff all over the place, Tommo bought bike no 67, new aero kit from Godfrey, Kate beat Paul at 10 Pin bowling – EASILY, Tommo’s auntie tried knitting a VB bobble hat…didn’t work out that well, (VB new signing)  Marti Pellowe  broke his ribs, (VB new signing)  Bob bought lots and lots and lots of bike parts….no reason but he loves it, Kev and Nath raced the RAF Dalton CX races against $hit loads of guys on MTBs and some fast guy everyone loves called “Lllooyyddyyy”, 10 year old George rode 42 miles of charity, (VB new signing) Pogo rode some Everest thing then rode home, Mark Calvert beat us at MTB just like in CX, Tommo visited Campbell Park 32 times, Kev and Tommo lost a day of their life opening a VB bank account (proper self harm). VB Scotland International Branch expanded with the addition of Stevo off of Fife, Richie remains AWOL or at band camp. And we bought some flags.

So now we’re all caught up, let’s get in to some serious CCXL Racing….cue Keith Perry (aka Keeef) ….cue Unicorns, bells, horns and other noise making equipment.

Whoooda thunk it, a league with 100 races, that’s pretty darn impressive. The honour of delivering the century race went down to Team MK, the league staple. They’re like the Punk IPA of the Brewdog family, dependable, you know exactly what you’re getting but will knock you out if you go deep. This year, they pulled a little waabitt out the bag… ‘deux’ fold. This was in the form of some lovely chunky man made steps and a fitting “100” logo etched into the hill….a bit like the rather rude one in where the guy has his wanger out in Dorset somewhere….it’s 36ft long BTW…FACT 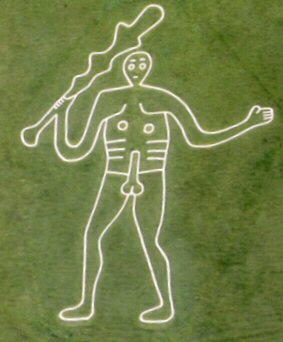 Plus a rather lot of climby climby. Now first race of the season is always a toughie, luckily a few of the VB had been nailing the FNSS (Friday Night Summer Series) which not only gave them an excuse for yet another bike, but it also gets the heart back to recognising that “WTF is this” feeling when you go from Zero to MAX BPM in about 5 pedal strokes !! So the first race wasn’t as bad as we thought. Cheeky course, lots of climbing, including the 100, some great features such as the steps…I liked those, however I bet Little Eddie hated them. Sweepy bits along the top, the back down to the guys of the bowl for hurdles and bants corner. Props to Tony W, Steve, Lee, Natasha, Rolph, Bob, TheMunc and all the other Team MK helpers who pulled off a great centenararararararary (is that the right word) race.

Special shout to John Cav , straight off of a flight from St Tropex after opening a weekend on the Champers…literally,…straight to race mode. Not a hangover puke in sight….plus he had a great result. Such a GIT !!

Round 2: THE BIG ONE – Campbell Park CXiTC

A ridiculous amount of planning, an overwhelming amount of red tape and an enormous amount of help from you guys in CCXL <insert love heart> made this a real corker. Course planning started months & months ago, but slowly iteration after iteration (4,358) it finally came together the week before. We started staking on the Friday with the obvious risk of some pi55 head walking home through the park skewering one of his drunken mates with a stake……but we let that roll. A 04:14 start saw a hardcore dozen or so grab the tape and start the 8km of taping. It was a pretty mad 4 hours but everything came together…..all that kept riding round Tommo’s head was his Dad’s comments he had mentioned the night before. “Don’t f*ck it up”. Cheers. Similarly for Kevvo as the named event organiser he was consumed with the thought “if it all goes to $hit, I could go to jail”. Other than that we were super positive it would be the day of all days in the CX world….

Anyhow, fast forward a few hours and the day was in full flow. The most stressful of all was the kids racing, lots of short races in swift succession, major room for error with the constant course changes but Jase and Pat were all over this like Weinsteen at an after show party.

One story we’d love to share is this….CCXL has invested well over the years including 30 radios for race day crew AND OFFICIALS but everyone is one channel. So picture the scene: it’s just before the start of the world’s biggest ever CX race with 149 v40 men, will there be any pinch points, BC’s Calvin Hobbes is on the air waves “Pits, Ready?”, “Race Timing, Ready?” “Contenders, Ready?” “Commissaires, Ready” it can only be a matter of seconds before the start whistle goes when Jase booms in in a panic “KEV  / NATH WHERE ARE THE UNICORN STICKERS??”. That friends is real life CX organiser bants right there!

We can’t really give you much detail on the race itself….as we (Tommo/Kevvo) didn’t get to ride the final course! But the pics / feedback and facial expressions gave enough away. 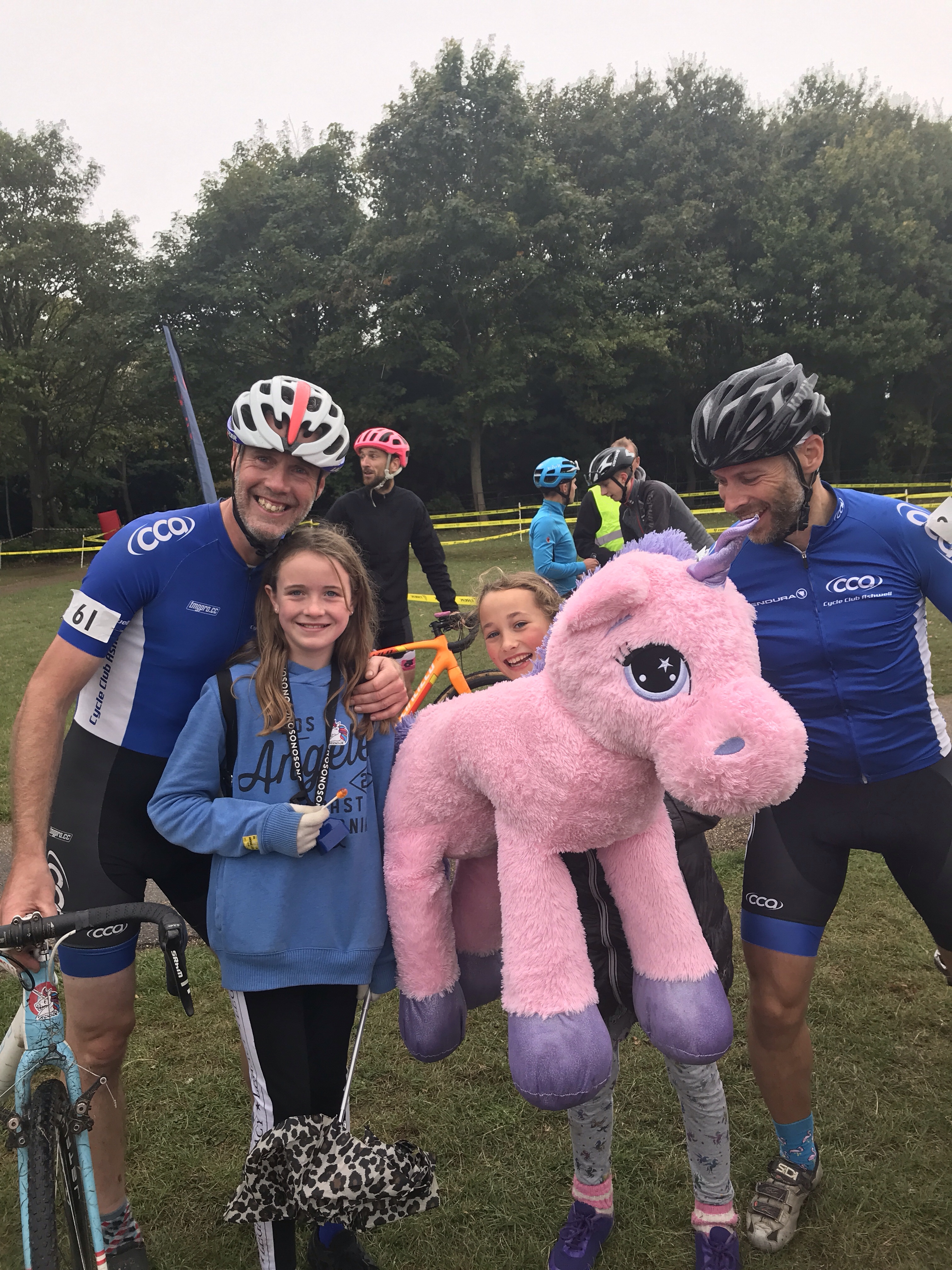 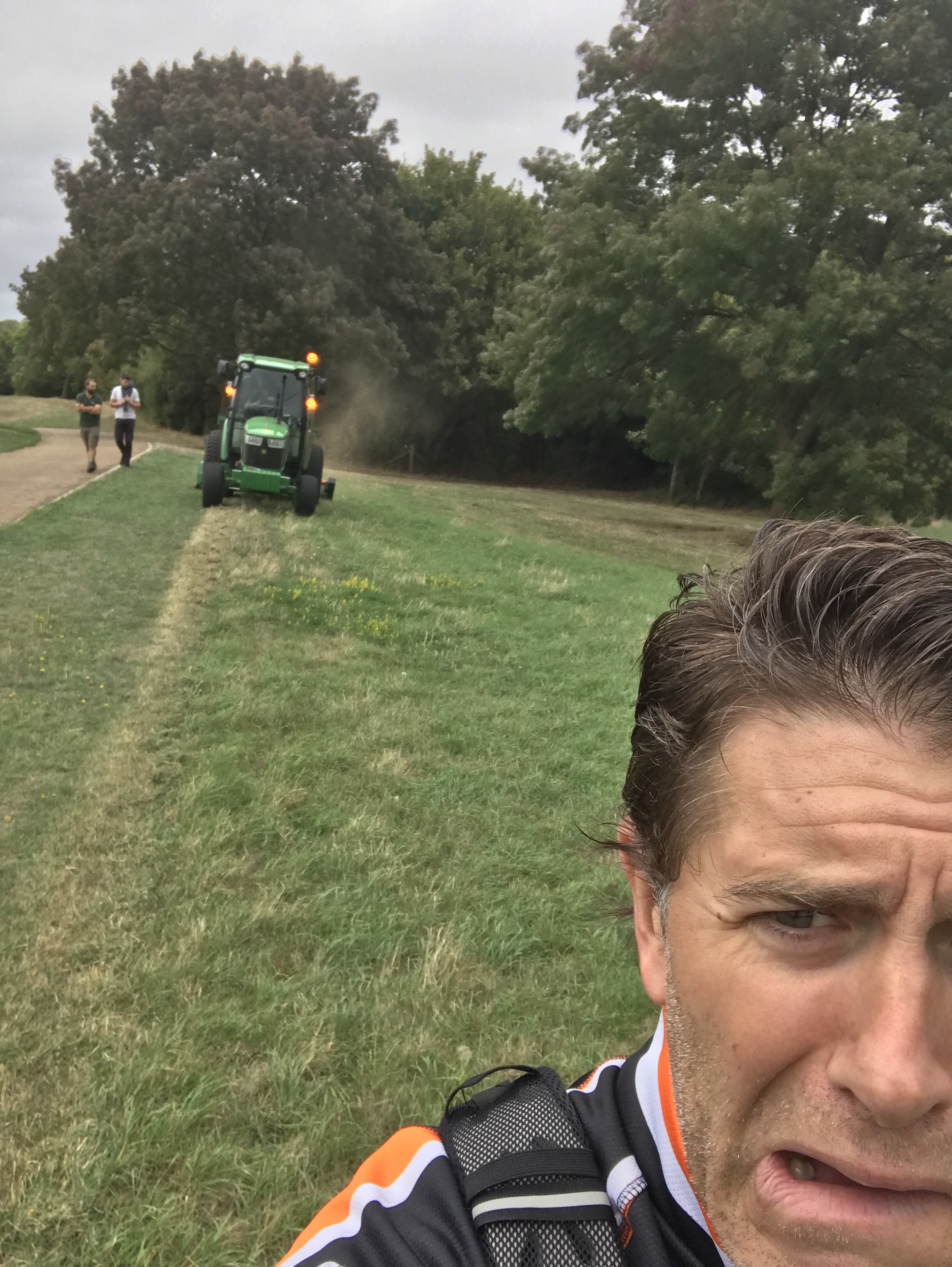 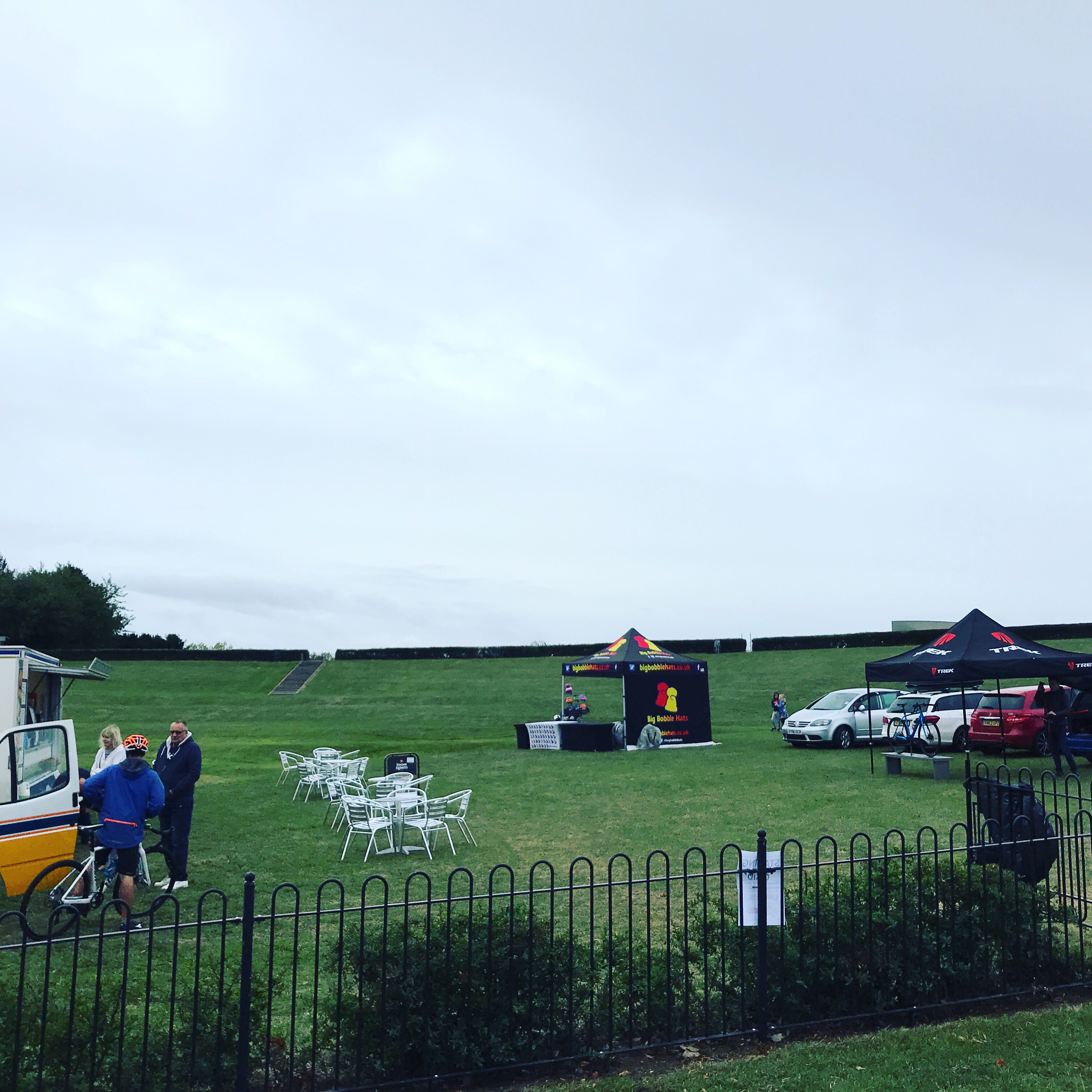 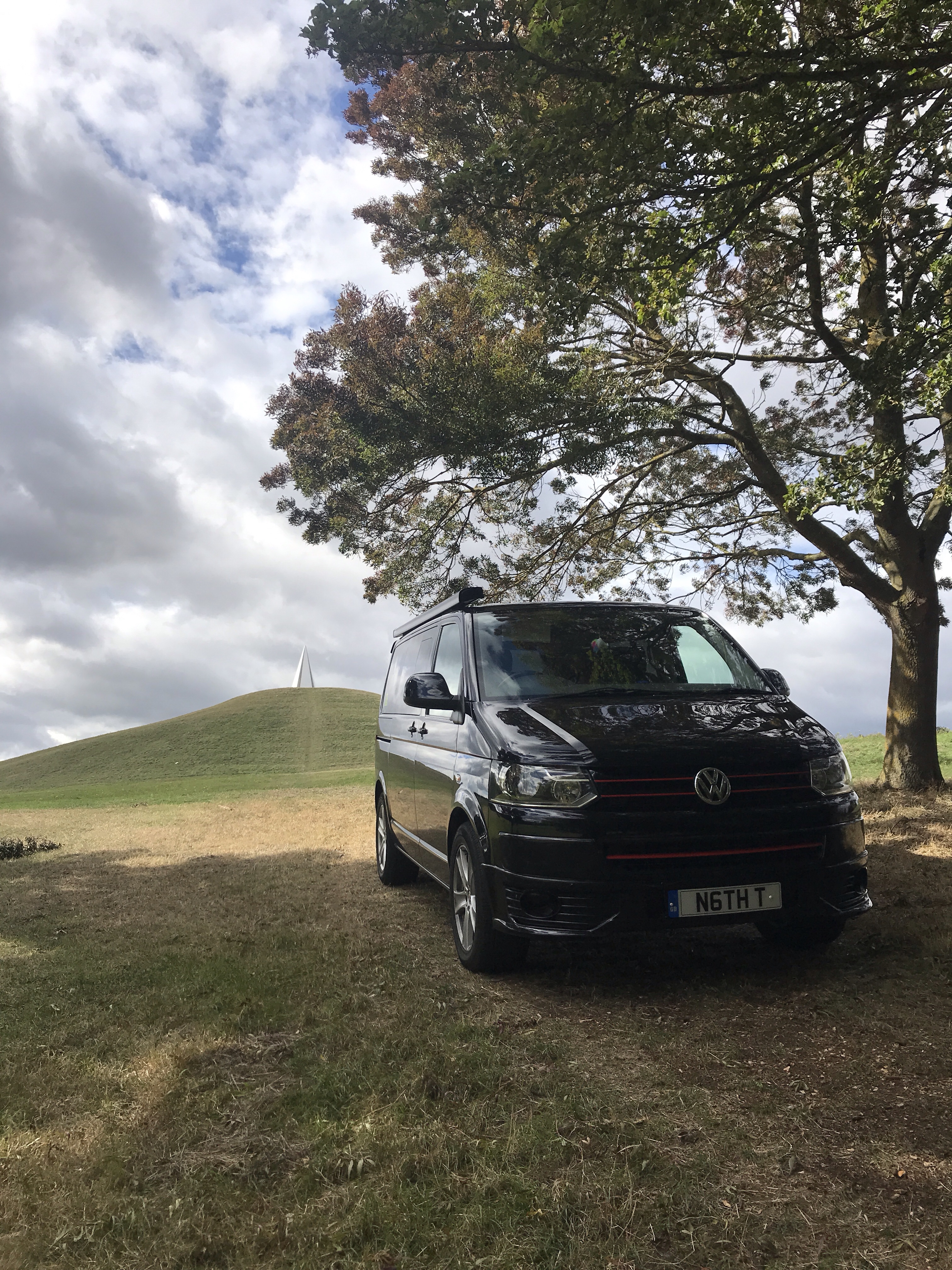 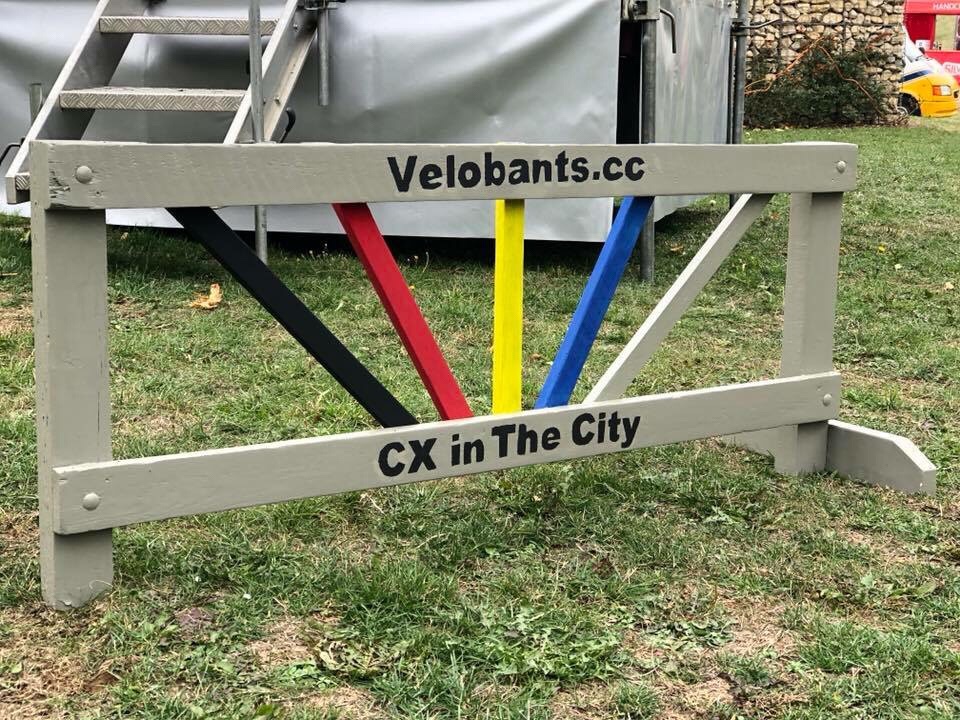 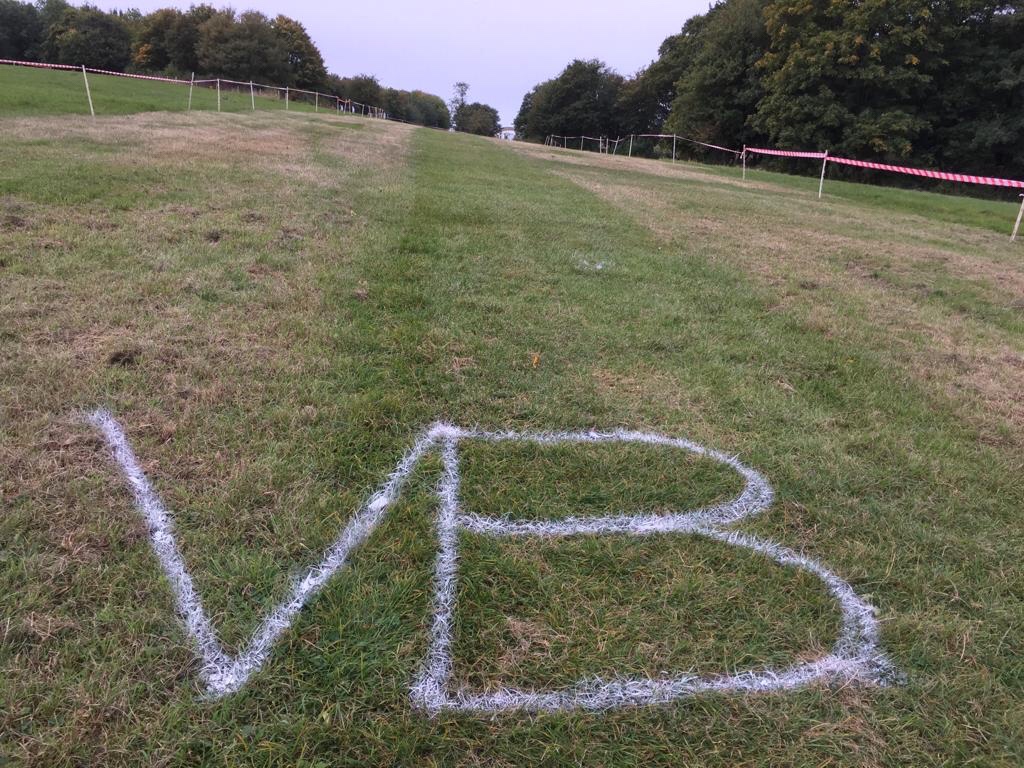 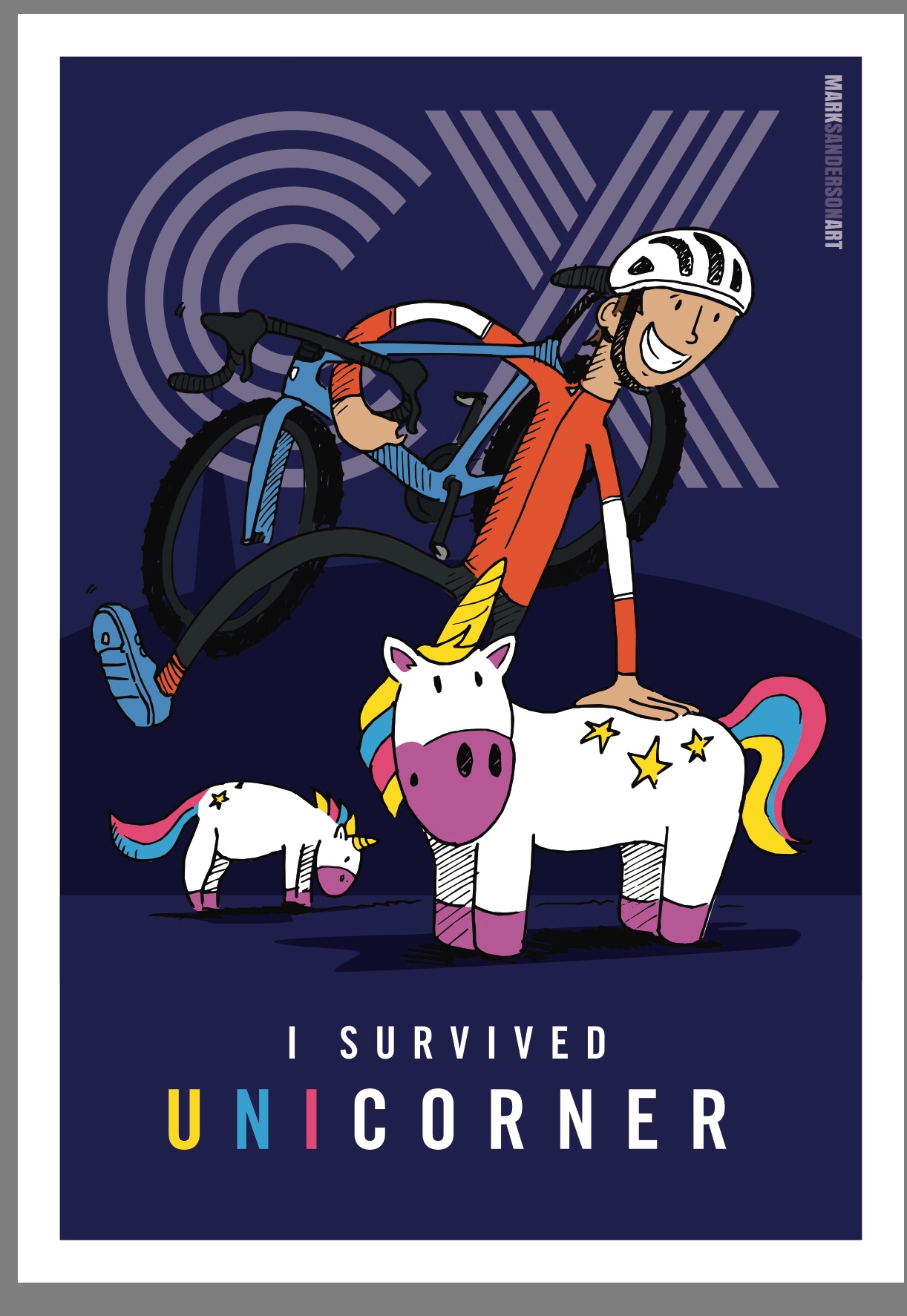 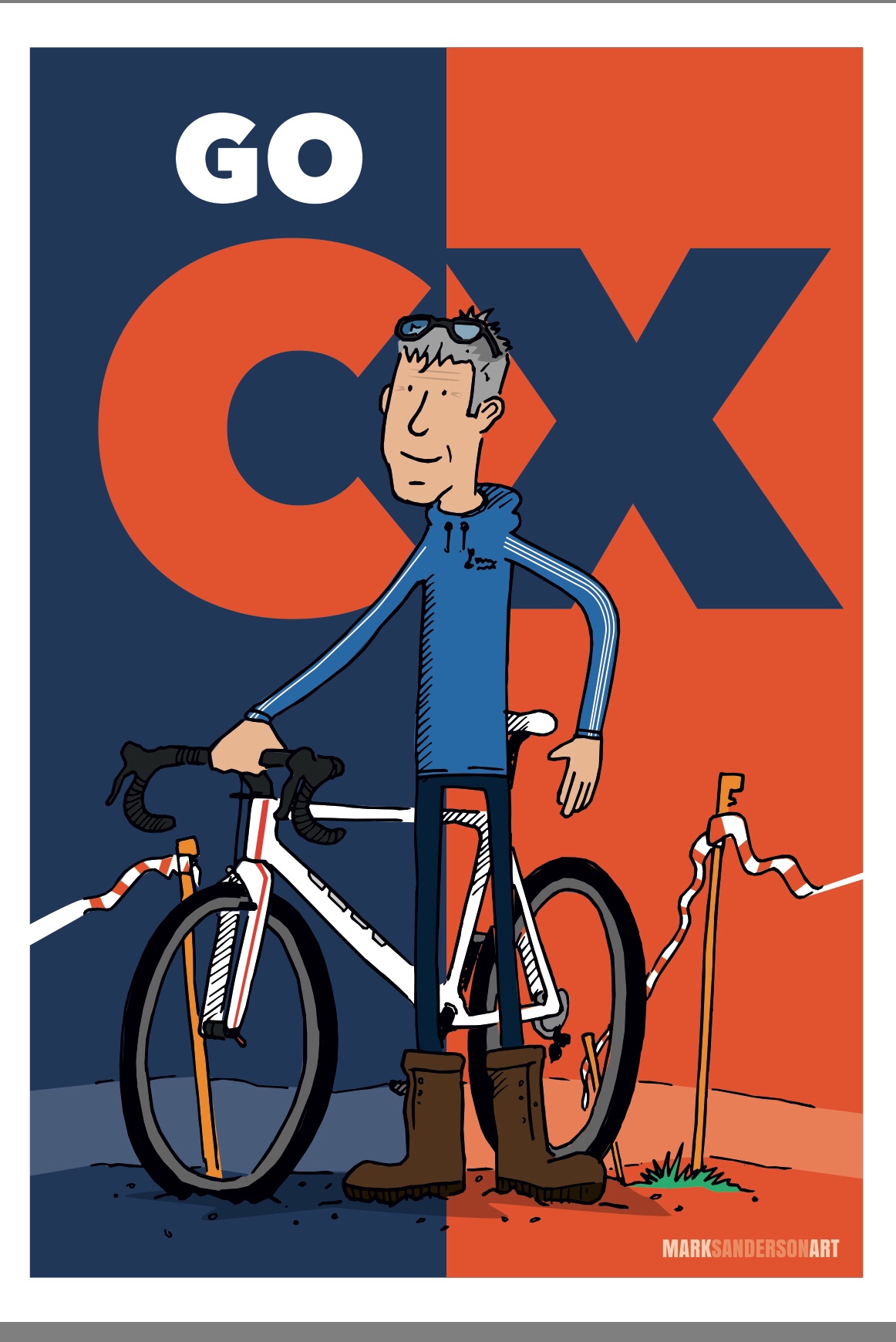 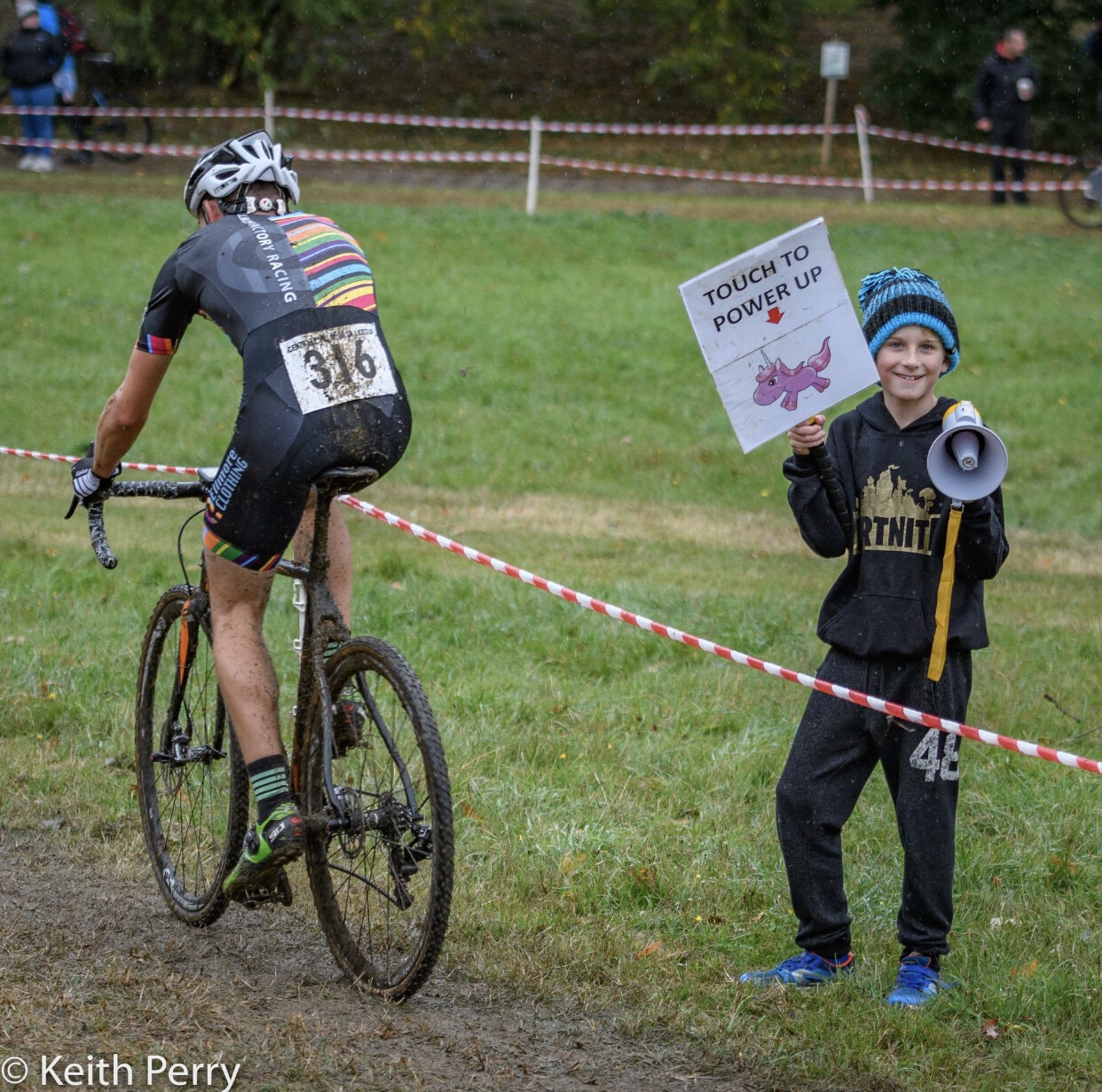 We had Gaz down from the Scottish contingent, he looked strong after a swift off from an amazing grid position of 25, nearly a postcode ahead of Tony Marriott, but unfortunately, similar to the VB Champs in Jan he had a puncture. Jumped on Kev’s (SIGNIFICANTLY SMALLER) bike in the pits but couldn’t muster the grid to finish digits. Great ride though and thanks for coming. Talking of distances….this guy (Constantio Dragicevic) came all the way from Chile after hearing Velobants were hosting at Campbell Park !! 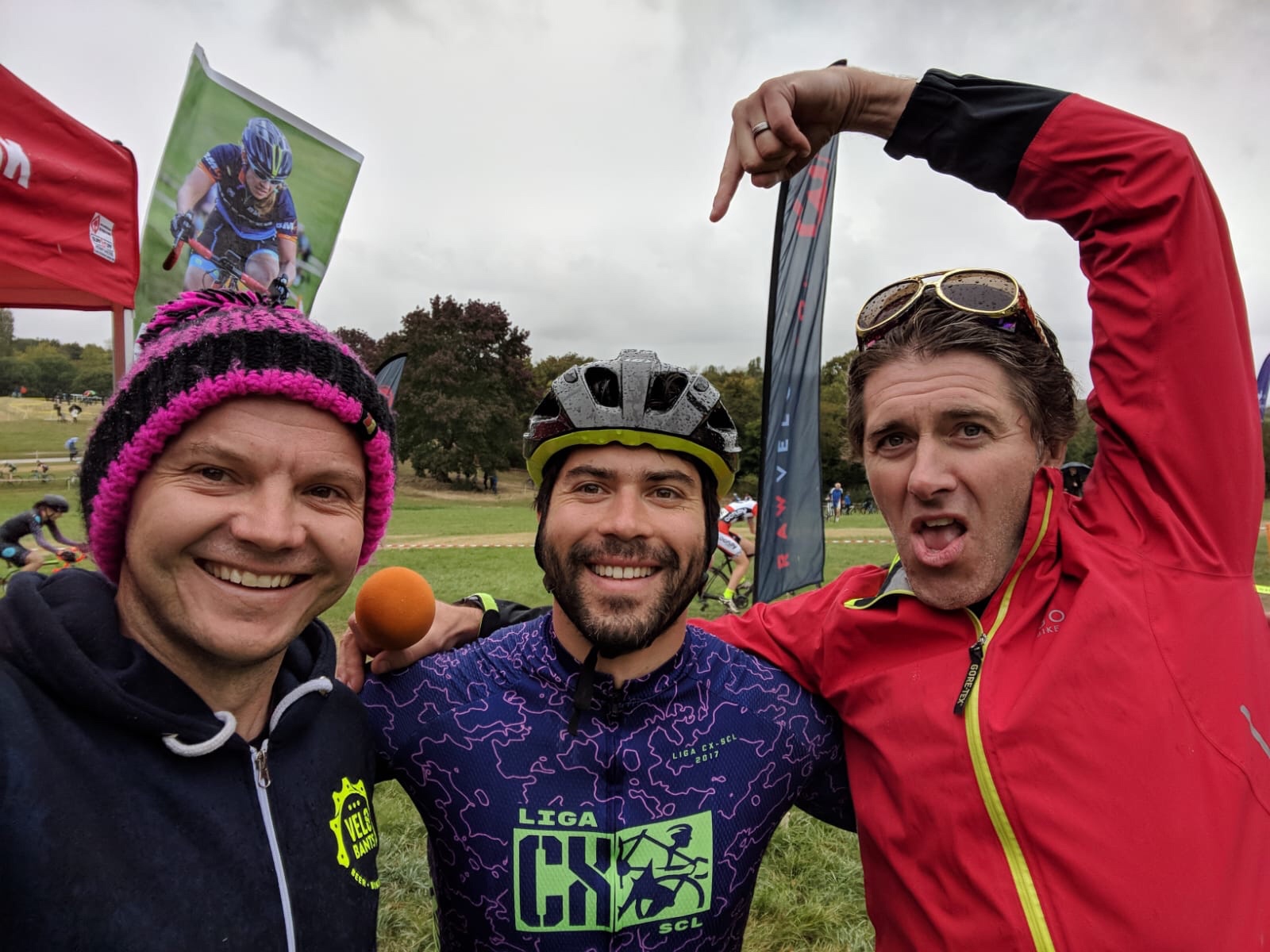 Great feedback, Parks Trust were awesome, riders were awesome, spectators were awesome, Fitzy was awesome, all the helpers (LOADS) were even awesomer, it was generally an awesome day of CX racing ! We have also heard of 3 instances where people came along simply to watch the race and the adults and children have literally started riding and of 2 x different children have already come along to a Team MK training session after seeing CXITC AMAZEBALLS…..that shiz is grass roots people !! To boot there were loads of first time CXers out there and instantly bitten by the bug!

Round Tres – Kettering. CXiTS….CX In The Sticks.

First off, thanks for all the riders who travel up from the South. Spraggsy / Chris Mont told me it’s a good 2 hours drive….so we doff our caps as that’s commitment, mug or no mug….good work.

The venue has a new parking area, loads and loads of it…although we didn’t get to see it as we had VB VIP parking. (Thanks Mikey Deeeee) We got in early and set up a good spot close to some forecasted action. It didn’t disappoint. Off the bat Tommo Jnr, George finished 5th…..his best every finish, plus he’s moved up to the U12s. Well done G. This stuck Tommo in a monumentally good mood, so pleased for the little man as that field is soooo strong !

The new format means the V40s are only an hour after the kids race so race prep really needs to be dialled in, plus with the increased fiddliness of the arm numbers this means (I mean really the speed we’re going at we could write down our own numbers as we pass the finish line) but team work makes the dream work. We had a good VB turn out.
Paul, Nath, Kev, Pat, Pogo, Bob in the V40s. Steve P was racing WessexLeague and Jase still has busted ribs. Kate was back from Oz in the women’s race and no rep in the V50s….Fitzy is busy house hunting in Woburn Sands.

The course had a mix of BMX Half pipe tech, a couple of techie inclines close together that meant a little prep was needed on the approach….or just generally avoiding the crashy guys <cough Pattinson & Patterson – they really should form their own law firm>. Some nice sweeping fast bends, and super nice fast decent to where the ditch took out a few riders last year. Then some climbing back out. Some of the uncut tracks were brutal on the arms…and fillings, but if you wanted to gain some time you could go full gas and destroy that stuff. Some great results. A great battle between Kev and Pat, which we think will soon grow in to a weekly box-office battle between Kev, Pat, Jase, Nath, Marti et al over the next few races. It’s great having a little club race within a race. Oh and Bum Bags are BACK….heard it here first @@

Then it was back to the shelter for some tunes and some horning of other fellow riders. If you’re ever around and see us we have a $hit loads of noise making equipment, come over, steal some by stealth and start screaming at people. Even if you don’t know them I just call their kit out….if they don’t have team kit on then just say “Oy……you….well done….GOOD WORK” It makes a massive difference, when you hear your name being called out by a bunch of over enthusiastic idiots with horns !!

Also feel free to bring your bake ware round for tasting, this week the Great CCXL Bake Off was kicked off by Kate aka Dr Bants’ unicorn biccies…