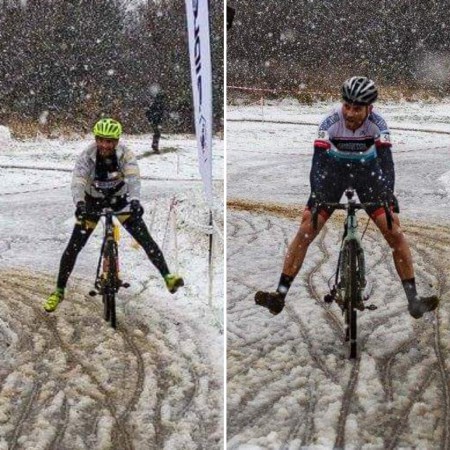 All was going so well until Friday.

My Weather Channel app started flashing up with alerts about snow….normally I disregard the all American feel good app but this was bad news oposed to the normal half glass full forecast.

The forecast got progressively worse as the weekend went on…it was going to be cold and potentially white!

So I hatched a plan, packed the majority of the gear Sat night and just left the bikes to put on the rack in the morning.

Wowsers, woke up early and was welcomed with a rather deeper than expected layer of snow.

At this point the kids level of excitement on the balance-ometer of CX versus sledging was totally out of kilter…..they were out. So that just left moi on my Todd. So I packed the ski gear, bolstered up on Under Armour tops and set off super early…..I had this journey nailed!

All was going well, the M1 was’nt too bad, I was being super cautious in the dreamachine; 105 BHP with AWD limited to the front wheels can be a handful but luckily I’m used to the power!

Now in regards to the Sat Nav normally I have uttermost faith in the Google chic….whatever she tells me when I’m following a route I generally take as gospel…but the M1 was looking above average however she was insisting I take the M25.

What do I know….well in this case…slightly more than her. I left the M1 and started to swing round to the right….this is when the shit storm of the day started….2 lorries had jack knifed and there was literally no room to pass. This is when the Chuckle Brothers manoeuvres started….dig the snow from the front wheels….move forward….dug out the rear wheels…move backwards….the truck  “To-You-To-Me” literally lasted 45 mins.

It finally cleared and off I trundled in pursuit of happiness. I got all the way to the M25 Jct 20, and this is where I encountered the “A Road Zone”. Essentially single file traffic hunkered down for the long haul due to an issue that I couldn’t see. I got out to have a gander but all I could see was queue…..

Now part of the VB plan this season was to represent at EVERY round and Kevvo and I have been pretty determined to fulfil this, so sitting there in the queue I was thinking I was far too close to give up….plus I’m a total points whore and just knew the numbers would be low so there was a great chance to score big!

So at that point, reason and foresight went out the window and stupidity and it’s mate idiotic came flying in.

I was directly opposite a church and thought this would make an ideal place to dump the car and head to the venue on bike…I mean a CX bike is the perfect bike to hit the snow on. Probably…..after a Fat Bike….and an MTB with Snow Spikes….but alas the decision had been made and I parked up.

Now this is where I didn’t really give the plan my full attention….firstly I was wearing 3/4 lengths….hmmm….not that bad….but I did have an UA layer, VB jersey and a NEW….yes NEW…. VB gillet. So I threw on a waterproof, a few gels in my pocket, my chip and quickly got the Google girl out again.

Now I won’t bore you with the journey, (Although I went through a frightfully posh gated community estate called Moorpark, reet posh it were) but generally it was wet, cold and a little slippy. But I knew this would a) be an awesome warm up and c) would hone my snow riding skills so I’d essentially turn up like Dougie Lampkin off of Kickstart.

Now looking back on my route, Google has certainly given me a run around on the Navi, but then I spose it took the fastest route dependant on the traffic at that time. Ah well.

Anyhow, I actually arrived in good time, 11:54 to be exact. Luckily the sign on was in the club house which, by the amount of condensation on the inside of the windows, looked warm…great a few minutes to thore out.

I dumped my bike, a very slick dismount I hasten to add, and shot in. Luckily I found my sheet, signed on grabbed the all important envelope of goodies.

Now there was a slight problem at this point…..I couldn’t feel my fingers to even open the envelope. So huge thank you to the kind lady from Hillingdon who helped me out by opening me up and also pinning on my number.

It was also around this time I realised I hadn’t drunk anything since a cup of coffee at 07:30. Yikes. However as we all headed outside to grid I managed to nab a few swigs from Paul B and his super secret energy drink. Thanks bud.

We headed over to the S/F line for gridding and this was the first time I had seen the V40 compliment, certainly slimmer than normal but around 20.

Now I won’t lie but I was a little shocked to be called up so early in the gridding announcement……BOOM…Tommo approaches the grid…..only to find a spot on the front row. Shut The Front Door!!!! I really couldn’t believe it!

Not sure why but you can hear so much better at the front when the commissares speak….normally from my average gridding I can usually make out…..”Whistle”…….”30 seconds”

So we were lined up……ready for the off. Normally at this point I’m like a coiled spring…..but today was a little different…..I hadn’t stepped foot on the course…..and to be honest I was fucked!

But onwards and upwards and the little boiled pea went a ding-a-linging in Ian’s finely polished stainless steel whistle.

Now as we all know, I’m normally semi-rapid off the line….wwooaahhhh not today. I went to put the power down and didn’t really get the normal FTP (Full Tommo Power). But we were off all the same.

Now before the race Spraggsy mentioned he had a hand in the course design….music to my eyes as he’s a proper snake hips camber captain…and within about 200ft we hit the start of the off road and the off camber Olympics.

Now riding in the snow off road is a “different” experience….especially when there is mud under the snow. Normally when you come to an off camber section you can find a section of unridden grass to obtain some grip, but when I tried this on the snow it wasn’t quite packed down….so grip wasn’t as strong, therefore riding the mud was pretty much the best option.

Now in terms of the course I literally can’t remember it in my mind to give you the normal turn by turn description. But I can certainly remember some great bits.

One thing that certainly rings true is the bants,  I managed to get a High5 from ALL spectators AND Commissares…..great work. Plus there was really a heightened level of jollyness amongst all the riders. Everytime we passed one another encouragement was thrown around. It’s was proper fun.

So lots of off camber mud, some great short power climbs, a finely located double sided pit, some great drags around the track (with random coloured grass not yellow though) and obviously the hurdles at the end just before the S/F straight.

In the first lap 2 things were clear….1) Spraggsy actually built the course 2 weeks ago and has been practising every night for 4 hours or 3) he’s a demon in the snud (snow + mud). The guy was on fire…..he dropped me pretty much as soon as we hit the off cambers, in fact thinking about it maybe he lives in a hill! Steve P was also off to a blinder taking some of the drops with lots of speed, clearly had his pressures all dialed in.

The first involved a swift trip to the pits….literally. Kate was waiting poised with the “Share” bike…..The Fitz flew in and dismounted…..all was well up until this point. Then it was as though he had been shot by a sniper….he literally hit the deck like the guy from Matrix when they remove the plug from the back of his head….splat. In a clamber to get up I swear to god I saw a snow angel in the snow!

He came flying out and hottly in pursuit. Down the long straight at the end was a switchback, off camber obvs, it was not rideable but took a finely tuned dismount to get the run off to a good start….this is wear The Fitz decided he wanted a momento of Hillingdon and basically just ran through the tape as it were the finish line on a dad’s sportsday race…cue expletives!!

From what I could see the main problem for the riders as the race unfolded was clipping in….if you could clip in you could ride….if not you were buggered…..unfortunately the dreaded snow SPD took the black death to Spragssy and Steve from what I could see and they were basically riding with huge snowballs on the bottom of their feet!

So we were 4 laps in (I think) when the flag came, and I must say it was a race that didn’t really get the max BPM out for me, it was certainly more a tester on the skills.

As soon as I crossed the line the sinking feeling hit me….shit I’ve got to ride back to the car yet.

I quickly dumped my bike as I needed to get warm ASAP and try to refuel before another 20 miles. Bravo to the cafe, they’ve clearly fed cold riders before and I indulged in hot chocolate, bread pudding, carrot cake and flapjack. Top cake!! It was around 13:00 so I know we I had to get a wriggle on as I might get caught short with the dark.

So I set off shortly after the V40 and Junior podium.

It was around 10 mins in I realised this was not a great plan and could swiftly escalate to a fecking nightmare. Yes the snow had melted considerably, however we all know this leaves freezing cold slush! After about 45 minutes I was absolutely freezing, my feet literally felt like blocks of ice and my hands were so cold I couldn’t change gear!! Anyhow, onward and upward it was a case of Rule#5 and I got back around 3.

Thought I’d add some pics from the Lens that is Keith Perry, some awesome shots!!

All in all it was an eventful day, great racing, a superb course and venue, a shame so many couldn’t race but the conditions were far from ideal.

So apologies for the lack of images or video, but it was certainly a different race for Velobants….however we will have normal service resumed at Berko for Crossmass!! On that note, we will have a special “area” for Team VB so please come over and say hi. After the V40 race we will be cheering all on whilst “hydrating”, some come share one.