Last weeks outing at Kingston Wheelers was awesome, plus the feedback from the video and blog was awesomer. This week we felt like naughty kids after getting a tip off and a ticking off for – cue geeky tech voice “The prohibited use of technical recording apparatus”. Don’t despair we have still managed to record some video from the side lines…..more to come. In addition we have applied for formal “Approval” from Mr British Cycling himself….watch his space.

Anyhow, less of the tearful drivel, back to the race. First off the bat, this is an amazing venue, its picturesque, up there with Halton Palace with a back drop of an impressive stately home, on-site cafe, ample parking, nice warm sign-on, easy access and loads of toilets. 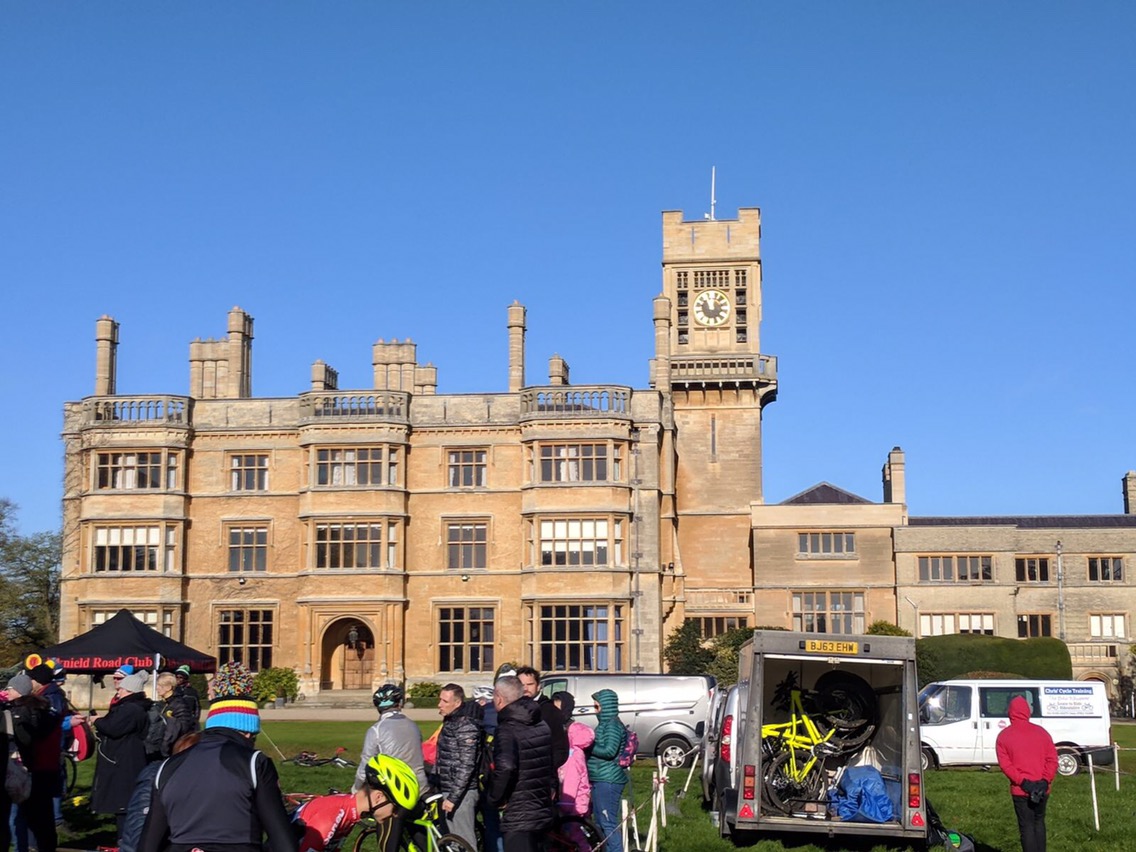 TOILET TANGENT: Talking of toilets, one small story from early on in the day. I feel for the guy who was in Trap 3, in the main sign-on shitters, next to me at around 09:42. There was some serious wimpering / borderline man screaming going on……I think it may have been a Vindaloo Saturday night…..a little like the time I put Deep Heat on the nether regions instead of Chamois Cream. Heal up brother…..heal up.

Some sign on snaps…..Keeno was finally back racing on his new whip. 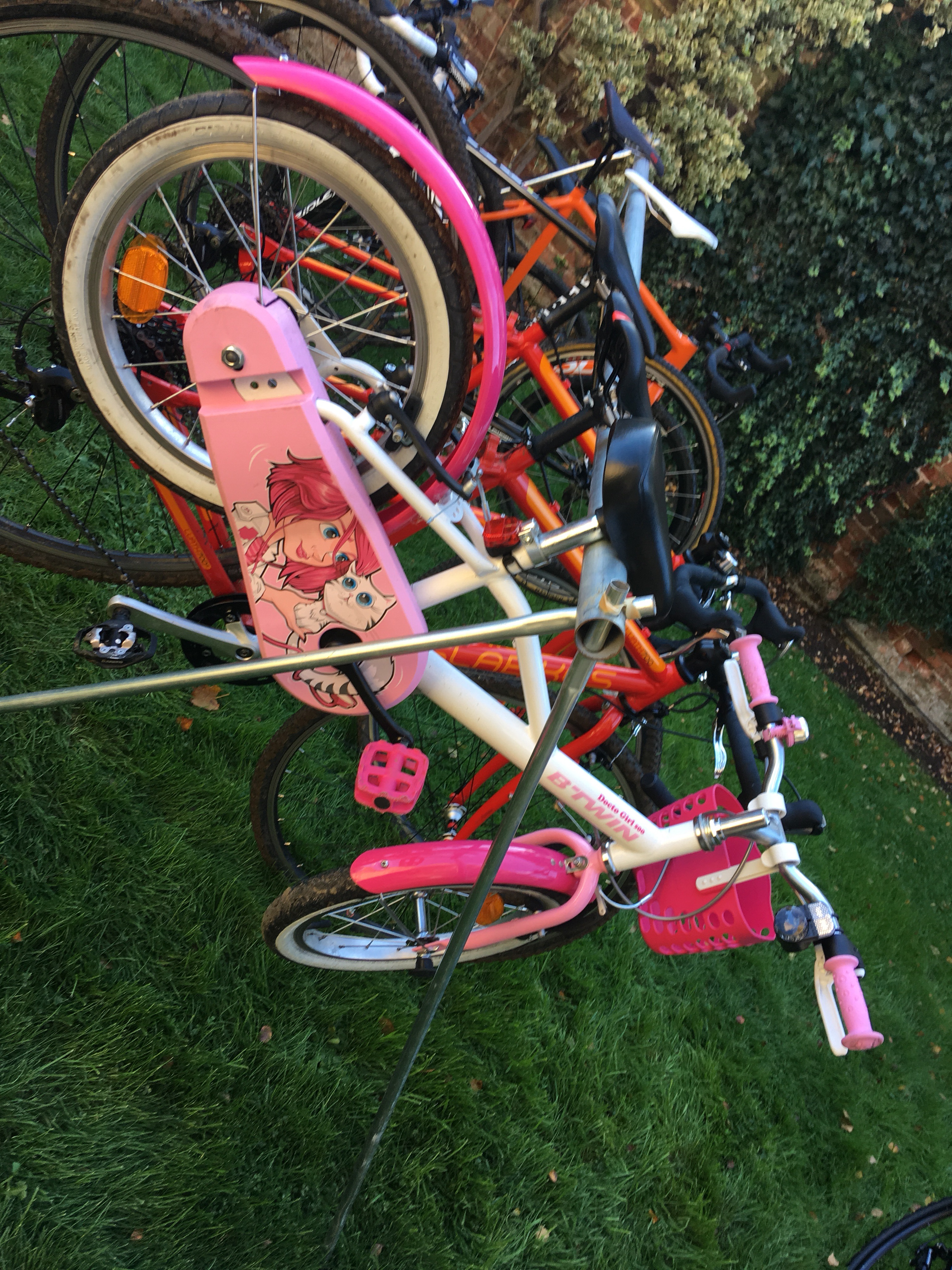 Check out those saddles….forget the carbon Brooks…..its all about the denim covered ass rests !!

Before the start of the race there were some bants…..Andrew Martin popped by to say hi….we obliged with a boomerang. Plus some warm up skills from Tommo.

Plus we also caught up with some of the other faces we have finally put a face to, Tony Marriott said hi, had a good chat with Spraggsy. Caught up with the main man KP. It was all good.  Need to catch up with Burt, Fran, Tim and JS in RAF Halton, missed you guys.

Managed to get a pic with the lovely commissars…..well I say picture….Ian is def smiling ;o) 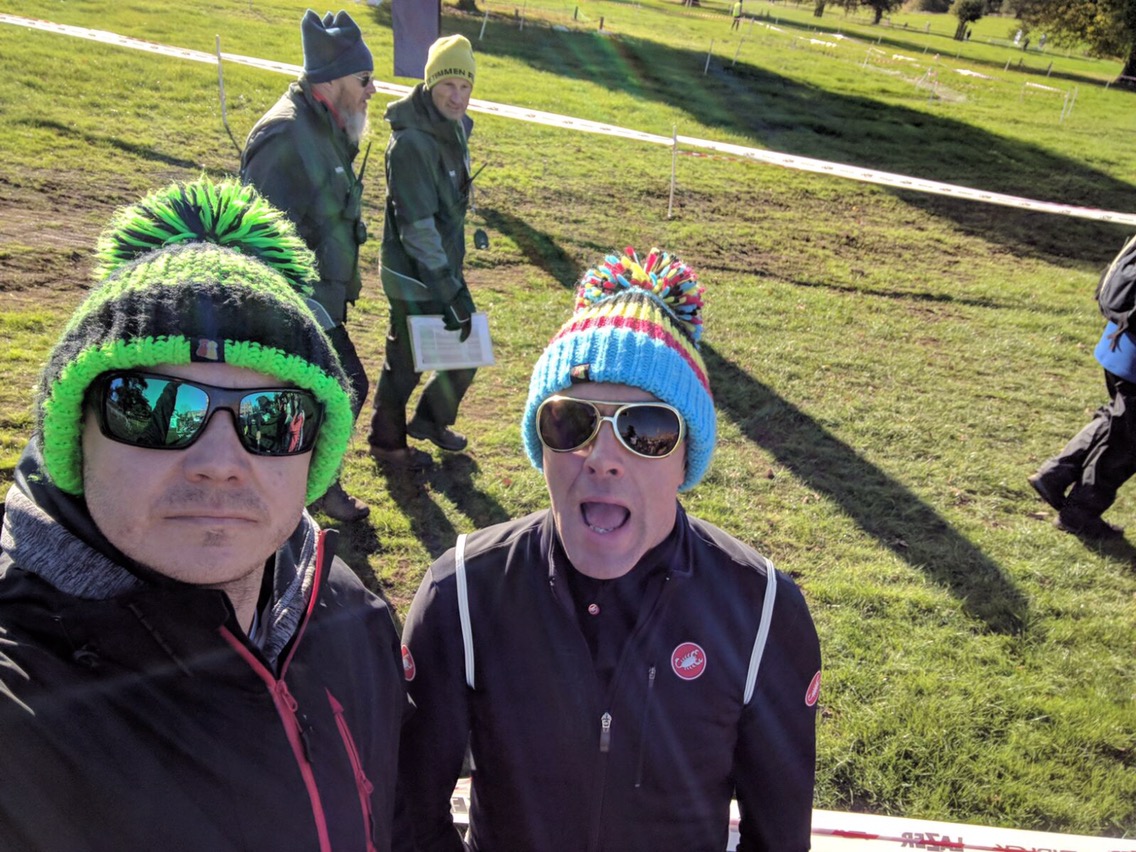 Keeno finally found his match in the blinking competition. 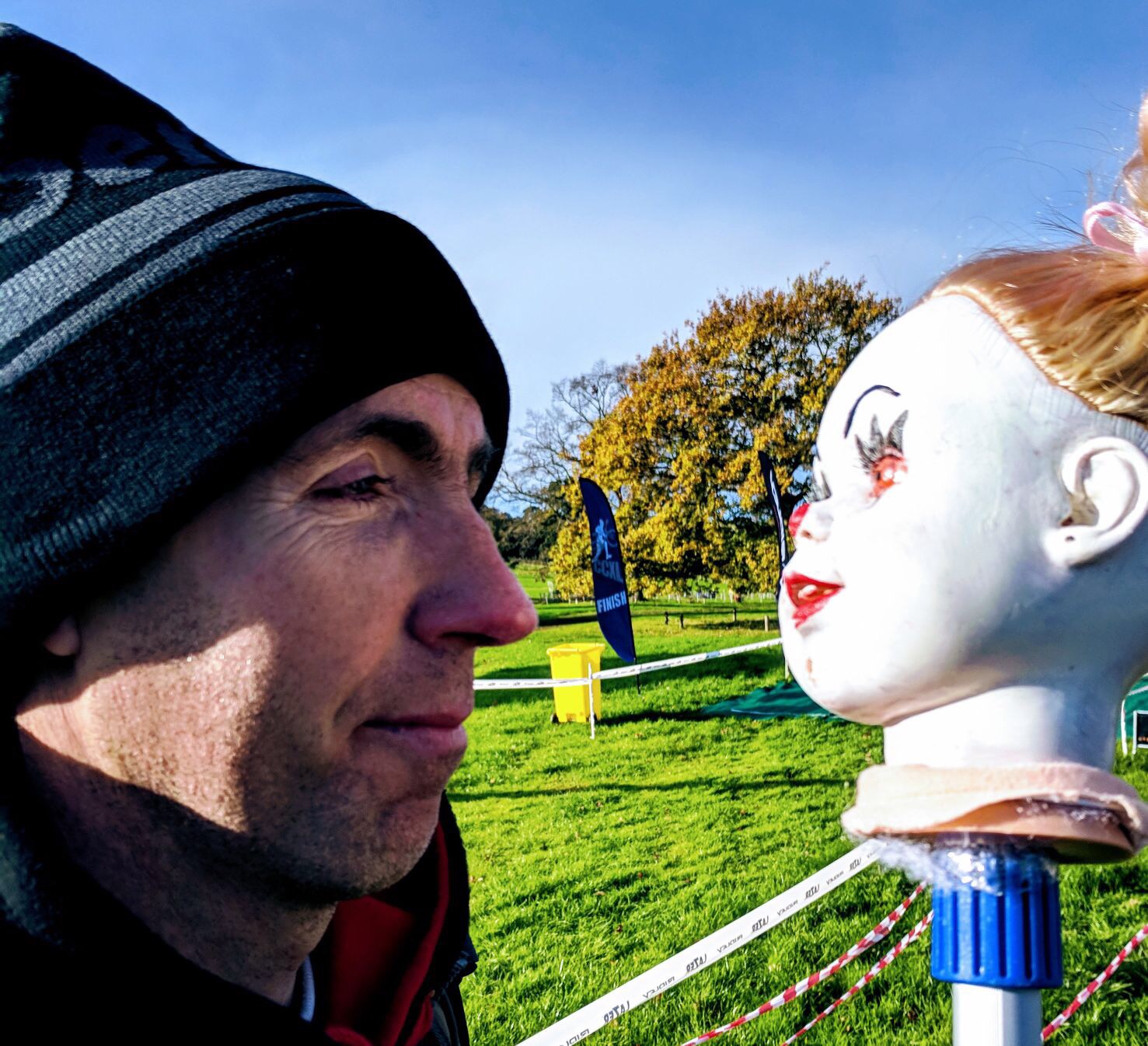 So the race…..similarly to how it was “Latin” night on the X-Factor on Saturday….todays theme was definitely “Self Harm”.  After the warm up lap Kevvo aptly named the course the “Brutalizer”. The climbing literally in the full first half of the course was really tough, pretty much from the start / finish line into the head wind you were climbing and climbing…..my Stramin device said it was 1038 feet for the full 5 laps / 40 minutes…..not entirely sure how accurate that is…..seeing as every week my avearage BPM is over 180bpm with a max of 205+. However I can confirm I literally felt like I was climbing everest…. 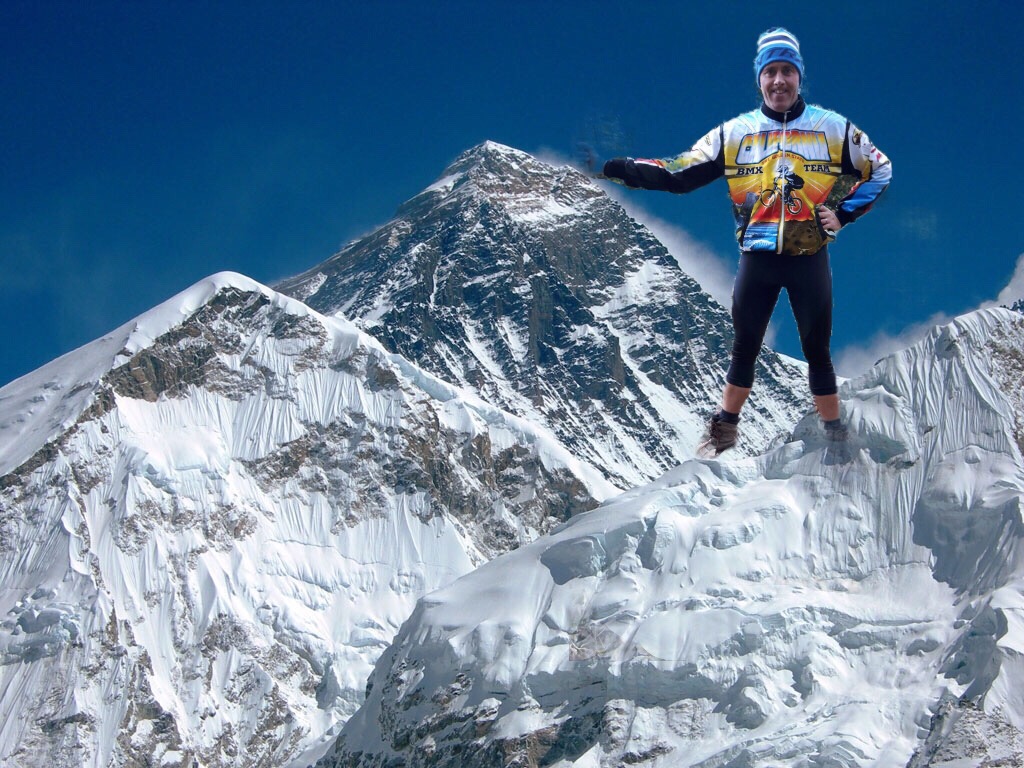 Anyhow….lets start form the beginning. Now after “Onboard-bike-footage-gate” Kevvo and I were expecting a kafuffle regarding the GoPros at gridding. We were tipped off there would be an increased level of inspection for cameras before the start. Kevvo was concerned…..his expectation was some kind of cavity search with surgical gloves….but Kevs bum hole was well and truly safe…..it was not as bad as we thought……a minor “A few have ruined it for everyone else” speech from the BC Commi Kings….but we were clear. Although there was a “semi-scrutineered gate” where my ass was given a good eye ball-ing. But we were sensible this week and rode lens free.

There were some bants at gridding…..a decent frequency of defamatory remarks thrown between the Equipe Velo boys, they’re crazy that lot…..although to be honest; them and the remaining front row were in a different county for gridding so I could barely catch what abuse they were throwing back at us working class. There were a few ‘welcome backs’ thrown around to Steve P and John Cavill after a few weeks off, good to see you back John….all be it for a few brief moments after the whistle ! There was a bit of  fluster fest from the guy in front of John and I…..who was clearly in 2 minds about what to wear for kick-off, it was like a catwalk with all the garments flying off….at one point I literally thought he was going to start naked !

So, the whistle went and off we pootled…..boom…..head wind……straight in a long drag followed by a climb, another climb…..short climb….track climb….off camber climb….lumpy muddy climb…..tree climb…..small decent…..another climb and then the final climb before a really nice long flowy section down to sea level. That being said the courses are for horses…..or is it horses for courses. They can’t all be the same….if they were all flat….all boring…..they’d suit some, not others…..so its good to mix it up, and I think this will (hopefully now its over !!) be the lumpiest of the league….. So this was definitely one for the climbers…..and also those with an exceptional ability to recover.

The majority of the course was grass, long-ish in length,  if such as descriptor can be used, which meant the concentration levels were on high alert on some of the sharper corners. Hurdles were again well positioned, it meant that if you grew some minerals prior, you could really hit these at speed. Clearly this guys Kahoonas were dragging on the floor most of the way round like a Towed Array. Turn up the vol as the crowds reaction is fantastic. BOOM….Bunny Hop machine

As I’ve mentioned before we race our own races……but around lap 3 a stampede, led by Kevvo, came steaming past, not that much of a surprise as I could hear the grunting as they got closer…..I jumped on the back of what seemed like a 50 man peloton only really to hang on for dear life as they were clearly in a better place than me. Kevvo pushed off the front, a great move, and put a decent distance between him and 2nd man and left the rest to battle away. Michael Pattinson was the instigator of the fast pace within the splinter group, who were gradually disappearing from me in to the distance……bizarrely from what I can accurately remember, to the tune of “You spin me right round baby right round”…note on DJ later.

Cometh the last lap, 40 minutes of racing under our belts, I was still at the back but determined to make up at least one place….Andrew Martin was my bogie at 12 o’clock, and he clearly knew I was bringing the whoop-ass as he stepped it up in the flatter last third of the lap increasing the gap. So we came to the last two corners and I was in sprinting distance, we rounded the last corner and we both broke out in full-retard, sex face, vein popping sprint to the line……the bastard got me…..but as I was looking up, approaching the end, I caught glimpse of the crowd around the finish line ,all with open mouths, screaming encouragement and frantically waving us on…..this is what its all about I thought to myself…..we crossed the line, a brief “Vettel / Hamilton” fist pump at each other, and the  standard stopping of the Garmin, chilling down……..

You know sometimes where you hear those voices in your head and you think, WTF is that…..you know….a bit like trying to participate in a conversation with a bobble hat on…..feint voices with some kind of important meaning but you choose to ignore. Then I could make just out Keith P’s voice…..I don’t think he was on the MC…..but he was shouting pretty loud: “Dumbledooor”……..”Dumbledoor……WTF is he going on about……then it was as though it was just tuned in to my radio station and all became clear…..”ONE MORE”……..”ONE MORE LAP”. Oh fuck…..the spectators weren’t screaming in adulation, they were gesticulating “What the shit are you guys up to you….have one more lap”

Instant reaction was a cartoon response from Andy and I looking at each other and miming the “What The Fuck” in slow-mo swiftly followed by the frantic changing down gears to get some speed back up. I think I must have said “Cock Womble” to myself about 100 times before I reached the top of the long drag…….what a chopper…..an absolute chopper.

After hitting the red from about the last 1.5km to the finish on the what I now know as the penultimate lap i don’t think I recovered for some time, my last lap 1m20 seconds slower than the others….Andy on the other hand managed the monumental biking blunder much better than I and didn’t lose as much time or places. I did chuckle to myself……lucky for me Keeno got it all on camera I think! Watch his space.

Finally on the real, not make-believe, final lap I crossed the line, knowing for certain this was for real due to the riders congregating around the “green flag” area. Phew…..I was battered.

As Steve P mentioned earlier on FB, its like CX is the devils work out for 40 minutes or so….throughout the entire race I feel like throwing my bike into the woods and buying a chess board…..however literally as my tyre crosses the line its “Wow, not too bad…..where are we next week”  Its that fave time of the week when we exchange post race gangster stories with the riders you have been battling with, fist pumps and congratulatory regards to all and anyone with gob dribbling from their mouths and cheeks like a baboons arse clearly showing the same level of masochistic tendencies as yourself.

Kevvo and I managed to catch up with James “Woodsie” Woodbridge, it was his first time out today for CX, gridded 100 (#KEEPER), but thoroughly enjoyed the race. Thumbs up emoji ! Plus we had a good chat with Spragssy. Top bombage !!

One very very small neutron sized negative comment, totally self indulgent…..there were times I was longing for DJ Jezzy Cox……seriously…….or more so, his tunes. He was spinning some banging tracks last week at Kingston…..but there was one point when I came past the hurdles through to the start finish line when “ABBA – Dancing Queen” was blaring out…..all I could think about was Pat (image below) (Velobants.cc non CX rider TBC)….some up beat, spin class stylie tunes to get the cycling juices and legs going would have been preferred…..personal choice mind as I’m sure there are loads of weirdos who listen to Abba when riding…..I’m more of a “Right Said Fred” kinda guy……

Anyhow, thats it for this weeks blog, if you see us at RAF Halton in a few weeks please say hi…..Some random pics to finish with:

Good to catch up with the SD Racing boys, these lads always turn up in force. (Although Fagans clearly losing a few watts from the tripping hazard….have a word Steve (#arebeardsaero?) 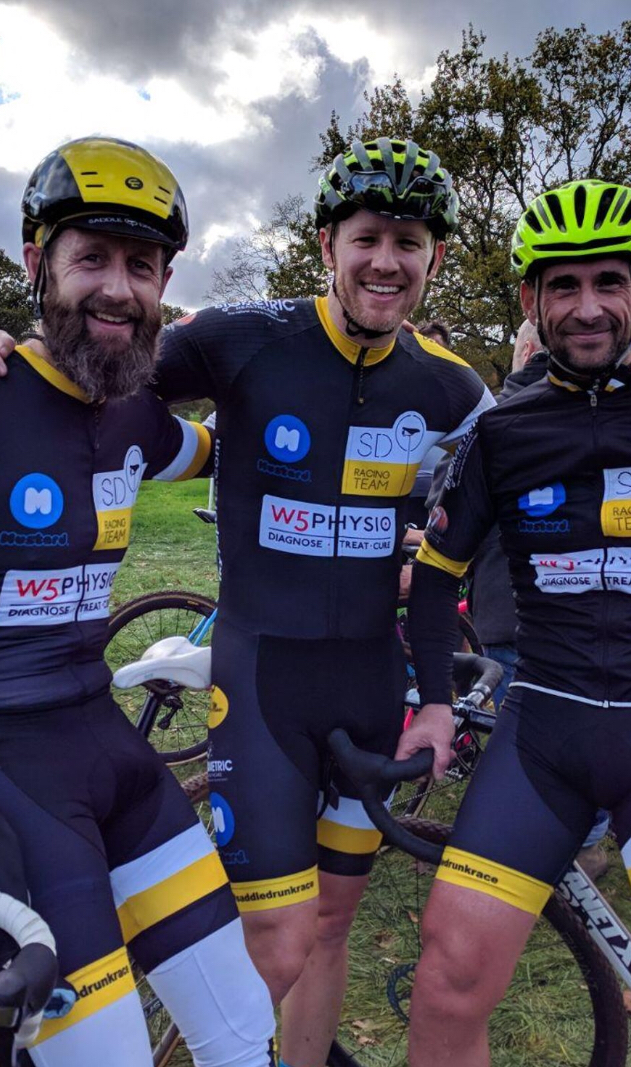 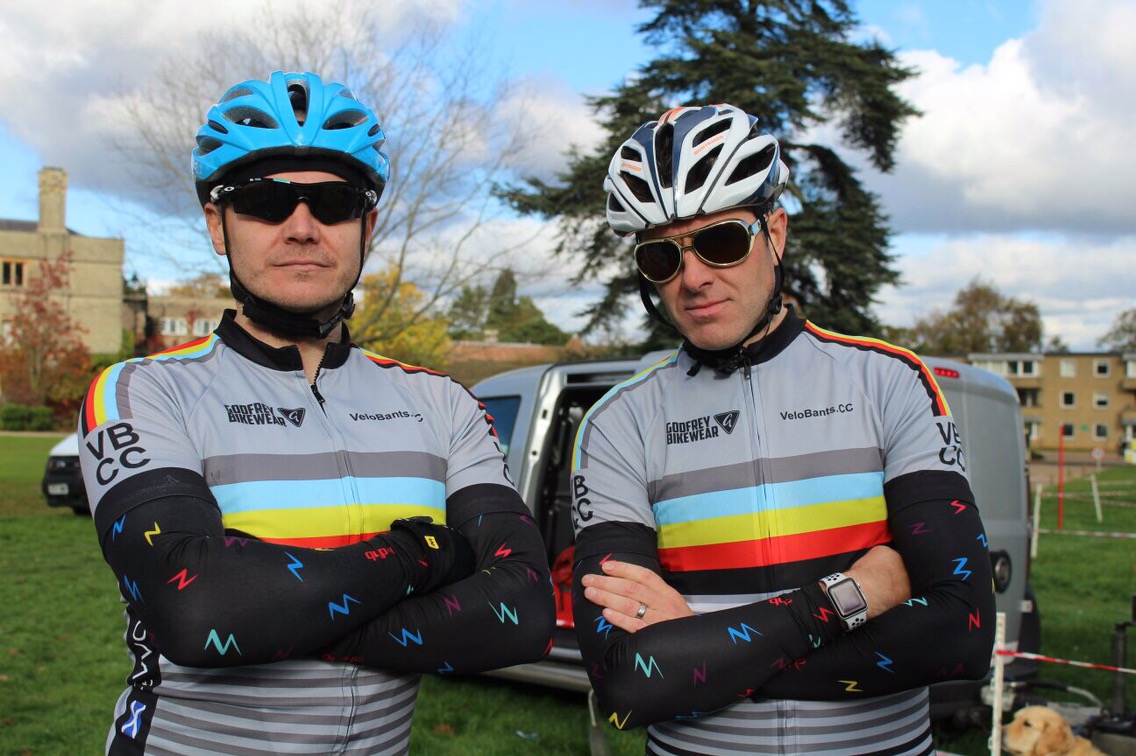 Last and by no means least…..a comment on the VB performance today…..from our own in house photographer and development squad sponsored youth rider…..BRUTAL ~ BUT TRUE !