Ok, I’ll get it right out there before I even start…..Round 6 – Kingston Wheelers……stonking course, they played an absolute blinder…a worldy of CX epicness……but hold it right there Daddio….the intro first to get the tubeless milk juice flowing.

First off, it was a trek to the venue or so I thought, A quick Google Maps viewing on Wednesday for a bit of pre-weekend planning & I was unpleasantly told it was a 1.5 hour drive away….so working backwards it was a 7:30am depart (I did the math myself). Not too bad I thought, clocks changing and all….no biggie. Anyhow, to cut a long journey short, thats exactly what happened really. We arrived at the car park (which was very well manned BTW) a shave before 9, no where near as long a trek as expected.

TANGENT: Now, unless your some kind of CX mega star or simply just an inconsistent racer, you tend to race your own race, and by that I mean every week you are generally racing several familiar faces….now just to put it out there….mine DEF aren’t the likes of Sean Dines, Mike Jackson and the rapid dude with the awesome tripping hazzard of a beard I haven’t said hi to yet…..those boys be super duper fast, I can’t even get close to them at sign on FFS…..however my racing partners in crime are the likes of Steve Pellowe, Spragssy, JSV (Or as we like to call him John-Claude Van Damme), Andrew Martin (on a good day and a bad one for him), Michael Pattinson (if I’m lucky) and fellow VB.cc rider Kevvo to name a few.

Now today, I was super excited…..as Steve was back…..he hasn’t been racing for a while due to ill health or as I like to think; a long enough duration for the PEDs to naturally migrate from his pee pee. Anyhow, guess who rocked up (literally) next to us in the superbly manned carpark as we pulled in…..yes…..Stevie Wonder. Now as I said I haven’t seen him for some time, and what a surprise it was…..Steve rocked up in a camper come Winnebago…come Rolling Stones tour bus.

It was like the parting of the Red Sea as he rolled into the superbly manned carpark….his farmers tanned arm perched out the window looking epic, all that was missing was a Dukes of Hazard style horn…..I mean this thing is cool…..uber cool…..it would need another section on that Top Gear Cool Wall thing…..a huge one out the side big enough to show its mahoosive proportions. He was like the Hugh Heffner of the mobile camping scene with vehicular accommodation……but alive obviously.

As we got the pleasantries out of the way…. man hugs all that kinda stuff. I was treated to a little tour of the waxoiled beast. To be honest Steve did run through the list of “enhancements” he had made but I’ll be honest, in my mind all I was hearing was the gravelly voice of Xzibit from “Pimp My Ride”….and may have caught the words….’TV’……’Rims’…..’Bitches’…..Rolling on 12’s

Feast your eyes on this list…..flat screen TV – tick…..toilet avec douche – oui….not 1 but 2 double beds – BOOM, (by the sag in the top bunk it has seen some serious action)….a hot water system thing…..brewing equipment #obvs and drapes that wouldn’t look out of place in Hilda Ogdens house…..and what looked like a ‘cat flap on the rear door’ (not a euphemism). Its a weapon…..a Belgium CX Touring nuclear missile.

It actually has a hand carving of Jean-Sebastien above the bed, 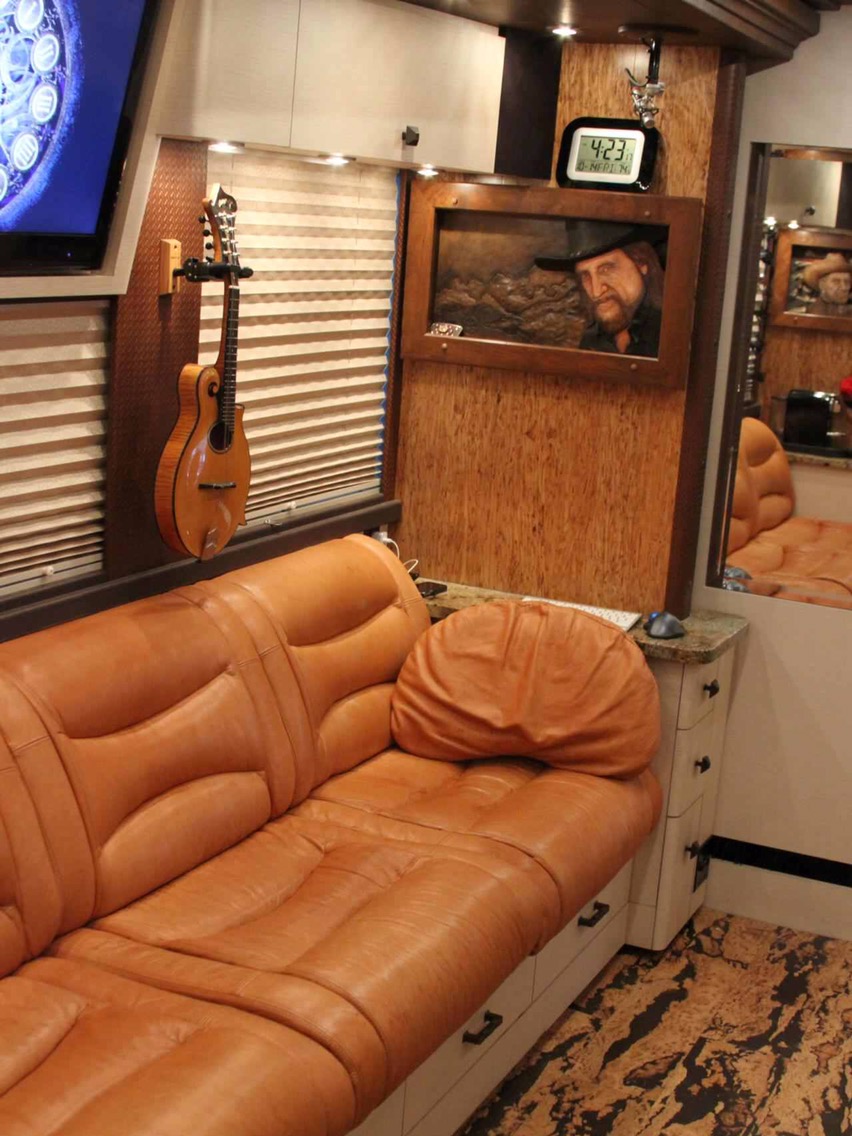 TANGENT: After the particularly average media storm of the last VB.cc blog / video of Round 5 we thought we would start shouting out to more riders in the league for various reasons…..after all whats a blog if it doesn’t talk about all the other class acts you ride with, therefore we have obliged.

Anyhow, back to the race…..as we arrived early we set up stall in prime position numero uno…..directly next to the single hurdle. Off the bat you could see this was going to cause a kafuffle…..lulling people into a false sense of security, in some way convincing them that in fact the hurdle isn’t  actually 40cm high……it was lower…..or rather…..do-able ! It didn’t disappoint as there were a few “incidents” pre-warm up…unfortunately none captured on film ! We grabbed a quick caffeine bomb from the awesome coffee vans and we were ready to roll. That was lush coffee BTW.

Spraggsy, Chris Montagu et al had been warming us up online thro’ Thursday and Friday after their busy course building sessions with a few pictures of the obstacles to wet the whistles. The climbs looked great, some variations in the off camber shiz and then there were “The Steps”….well……online these looked about as close as we are going to get so far this season, to CrossVEGAS……bring it !

At 09:30 they opened the course with the NEW & official “waving of the green flag” (no not a euphemism) so we scurried round to the official green flagged entrance and kicked off a few warm up laps…..destination…..The Steps !

A few “sessions” later, we had absolutely mastered the fine art of making an obstacle of average difficulty look like something out of Red Bull Rampage…..other riders watching must have literally been shitting their bibs ! I’ve turned to the volume down from the clips to remove the laughter !

Now if you want a comparison in terms of “Ride vs Leggit” this is a further clip….make up your own mind….

So to the race / course: All the stuff that mattered; coffee wagons, club huts, sign on, Start/Finish, Go Ride and DJ Jez were all cleverly shoved into one area, a sort of arena – a great idea, I loved it.

The Start was just round the corner from the timing chip mats, the start straight was a slight change to the main course, missing out some of the initial off camber mini-climbs for the first lap and it threw you straight into the faster section of the course, again, a nice idea and it gets the racing off to a rapid start….also gets the BPM up well high very quickly…..not great if your warm up ended 20 mins ago ! A number of straights with hairpins at the end ate up a chunk of the 3.4km course,  and this saw the first casualties of a couple of the leaders…..the dreaded course tape around the rear mech……Uh-Oh – we wouldn’t be seeing them for a while.

The straights then lead nicely into a little single track setting you up with velocity for The Steps, (however before hitting that I was passed by these pair of flying machines below, simply playing up to the camera….I definitely condone this at any point on the course)

Spotted  a Minion on the course….Ed Catford ;o)

And again by Paul Fitzpatrick….nice pass in that wind…he was virtually licking the camera !

The Steps on Lap 1, as you can imagine were a little congested….however with my testicles virtually dragging along the ground after my recent confidence boosting “sessioning” of the steps I felt somewhat invincible and eager to please the ever growing crowd…….that sentiment approximately lasted to Step No 3 !! A dual sided clip out was called for mid steps and that awkward shuffle with legs either side of the bike to clamber the last 4 ft…..what a bell-end…..an absolute bell-end. I even managed a little chuckle to myself. 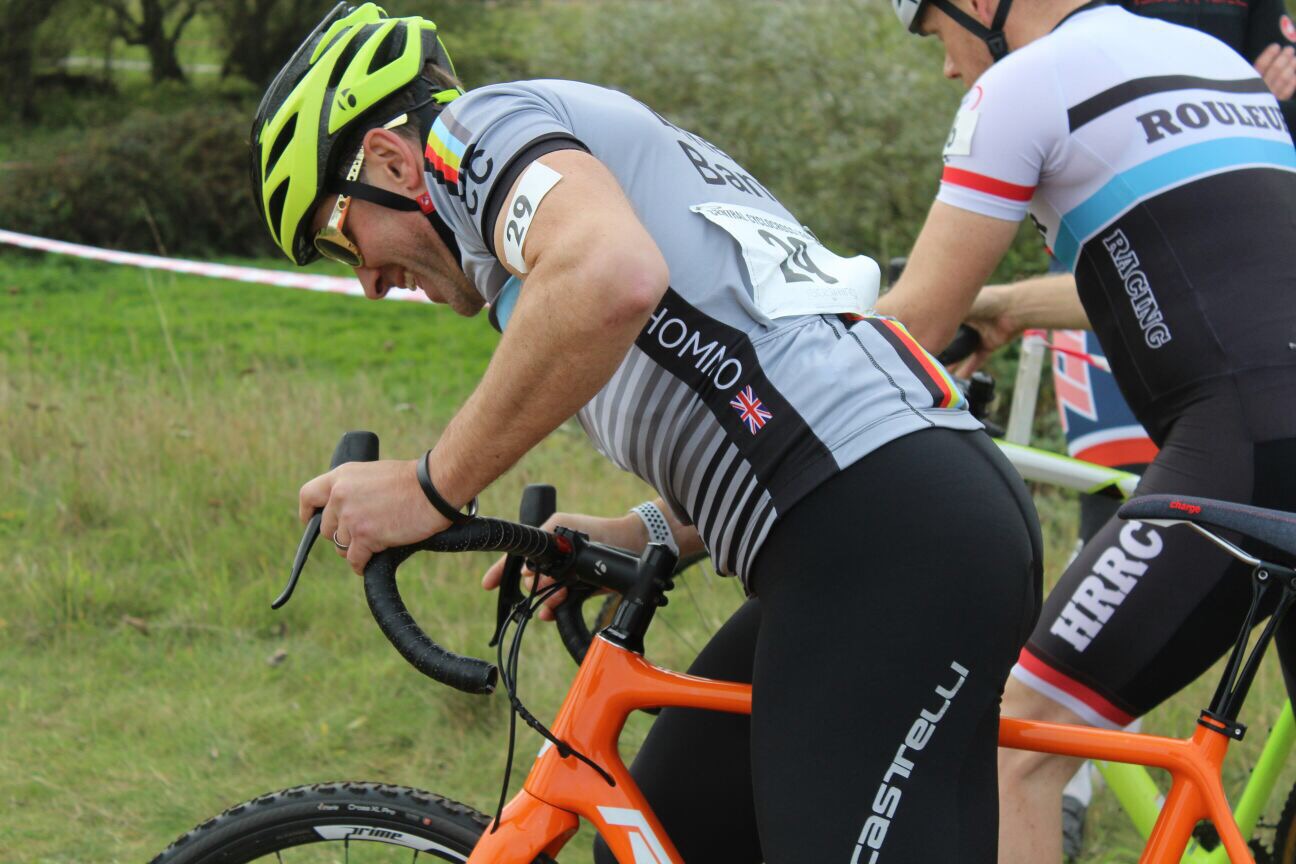 A small drop down the path from the steps into a fast flowy section up to a handful of shorter hairpins, this time with a small incline at each end, and with a clear run you could really get into a nice rhythm. Popping out of these, it was a drag past the pits, another hairpin and a return leg to the double hurdles. Personally I liked the position of these, there was bags of time to get the approach right, unclip and take these at speed. From the other side it was straight up what Spragsy had titled the “power climb”….a short blast that started to take the toll on the quads after the first few laps…..semi-brutal.

This took you up to the highest point of the course, along a slightly windy ridgeline and then down a grassy decent into a hairpin at the bottom. A swift about turn, back along a gravel track, the end of which threw you into another tight hairpin, I think this caught a few out throughout the day as I could see some “rear mech” shaped marks in the gravel on the apex. A fast blast back to the main area, some would choose recovery, some would choose to make up places….I chose acting like a limpit to the wheel in front of me as it was a tad breezy. A few more twisties and it eventually brought you back to the main arena, over the finish line and back to the start.

I absolutely loved the course, everything about it, I could really tell it had been designed / built by people who ride lots of these races. It was probably the slickest Sign On I have encountered, huge tables, lots of queuing space and lots of pairs of hands to fish out those valuable white envelopes. The MC was very good again, plus some tunes blasting out when he was fed up of filling….it was a really good vibe. A shout to the MC, Jez Cox, I think it was, he was pretty swift at calling out riders names, at one point I’m sure he said I was an ” I R O N – M A N” or something to that affect, which does always give you a “Ahh thats me……cool……he knows my name” and spurs you on a little faster.

A simple but affective segawy into a few shout outs of our own……some great high fiving spectators along the hairpin straights, Dad was wearing an SD Racing puffa jacket….I made a point of rewarding them with a few in flight packets of Haribo……

This guy definitely deserves a mention, he was the Mexican style wrestler marshall dude ….Nathan Wilson who rang his bell continuously for my 42 minute race…..LEDGE

This has to get a mention. Andy Lowe is shows simple yet effective poetic elegance, something Ludwig Minkus would be proud of (google that shit)

This chap who gave supportive heckling to Kevvo when he threw his chain….again rewarded with some Haribo candy…..come on it is Halloween….however I think he was just randomly walking his dog and may never appreciate this gratitude!

Matt Johnston (we think) who you can just see clearing the hurdles….epic !

And a general hugeous thanks for Kingston Wheels and GS Prestige for hosting a rather splendid race…..the best of the season for me !

I’ll leave you with the standard self indulgent pics of us and others I randomly snapped….. 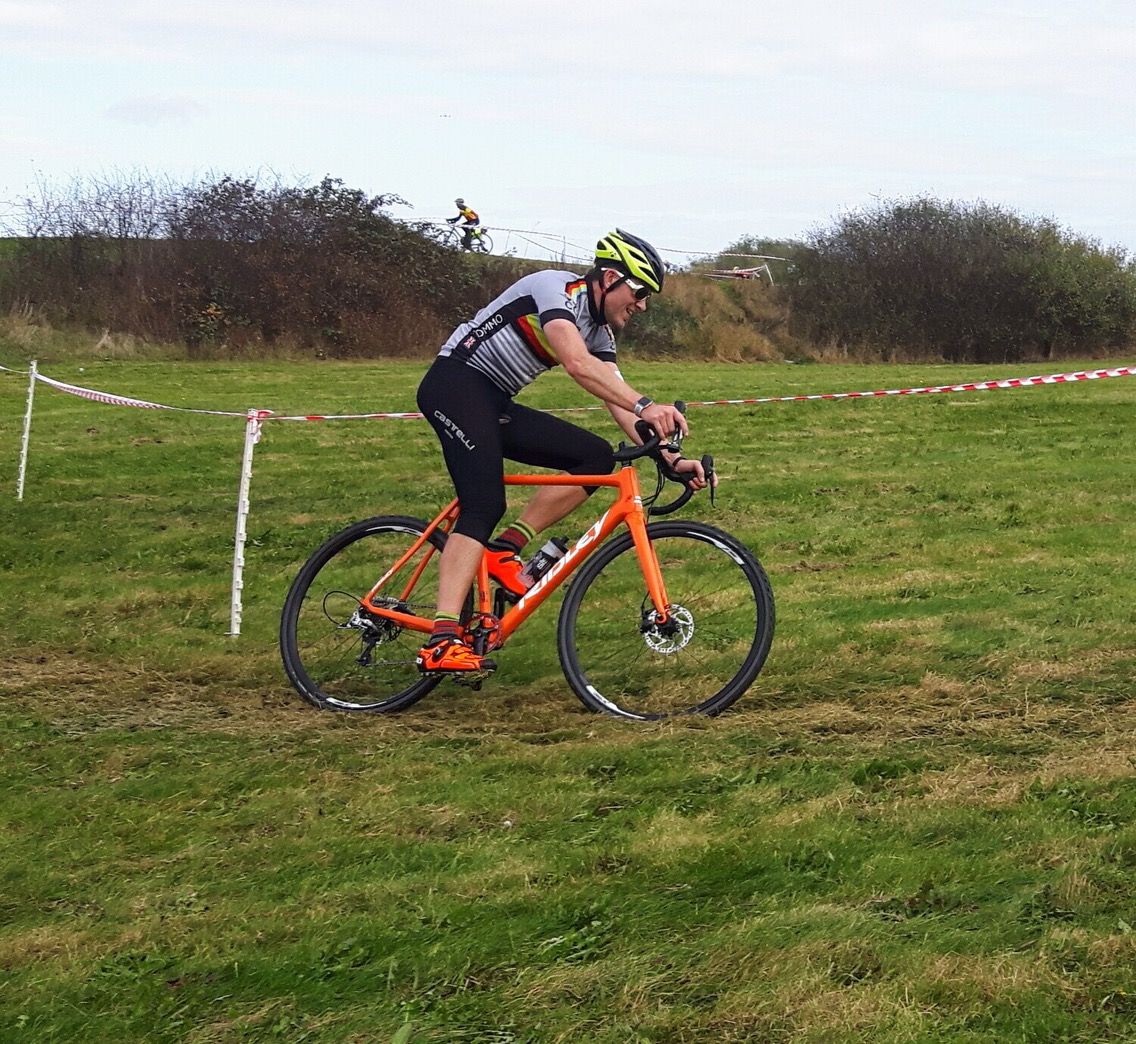 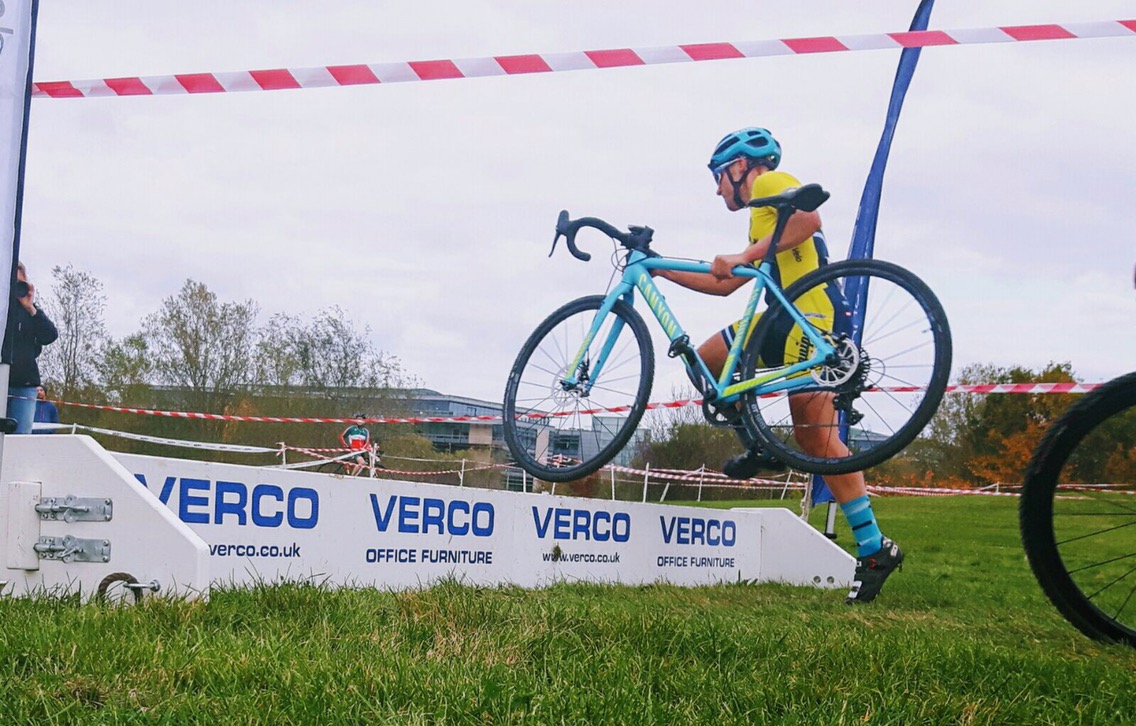 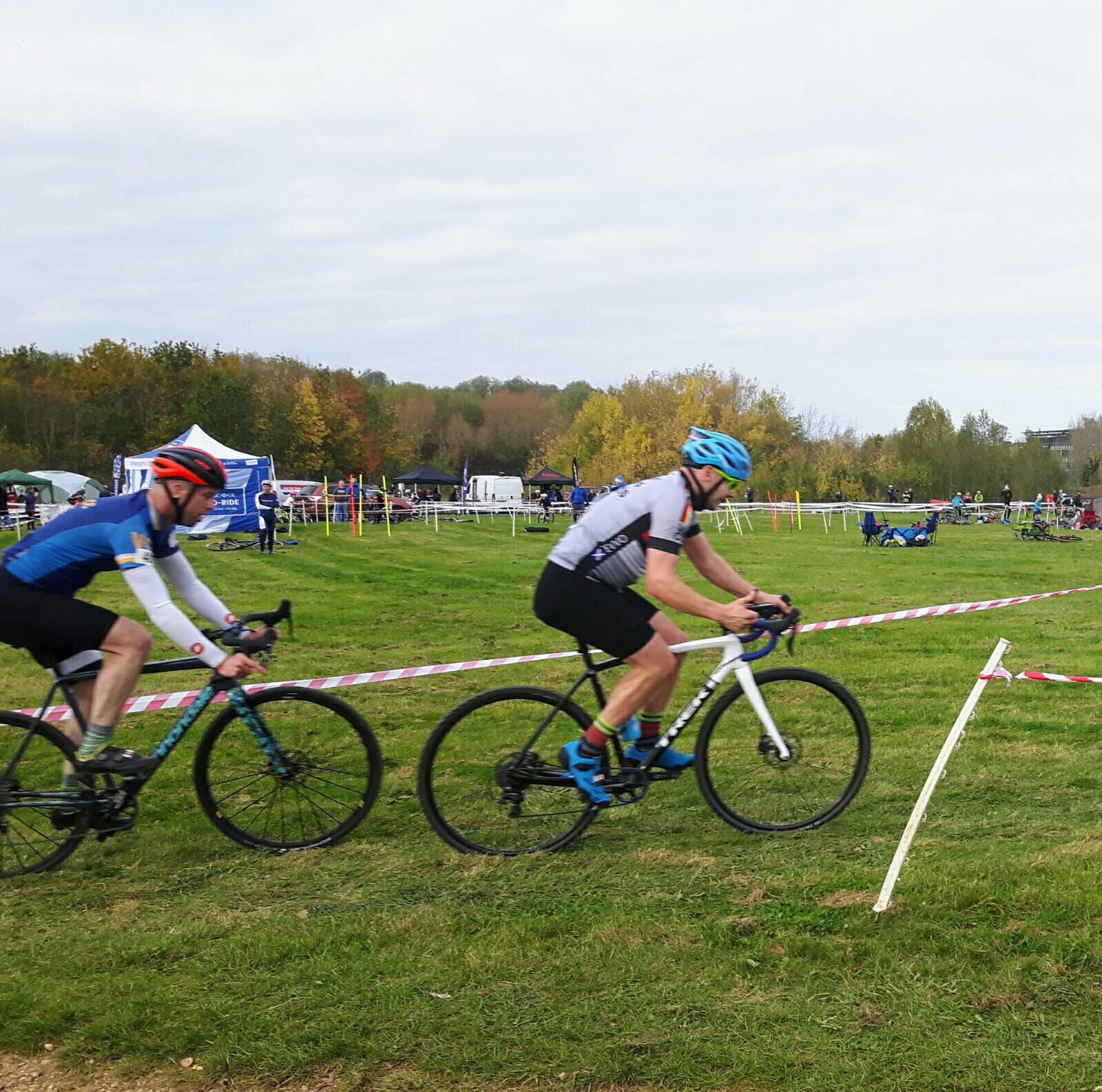 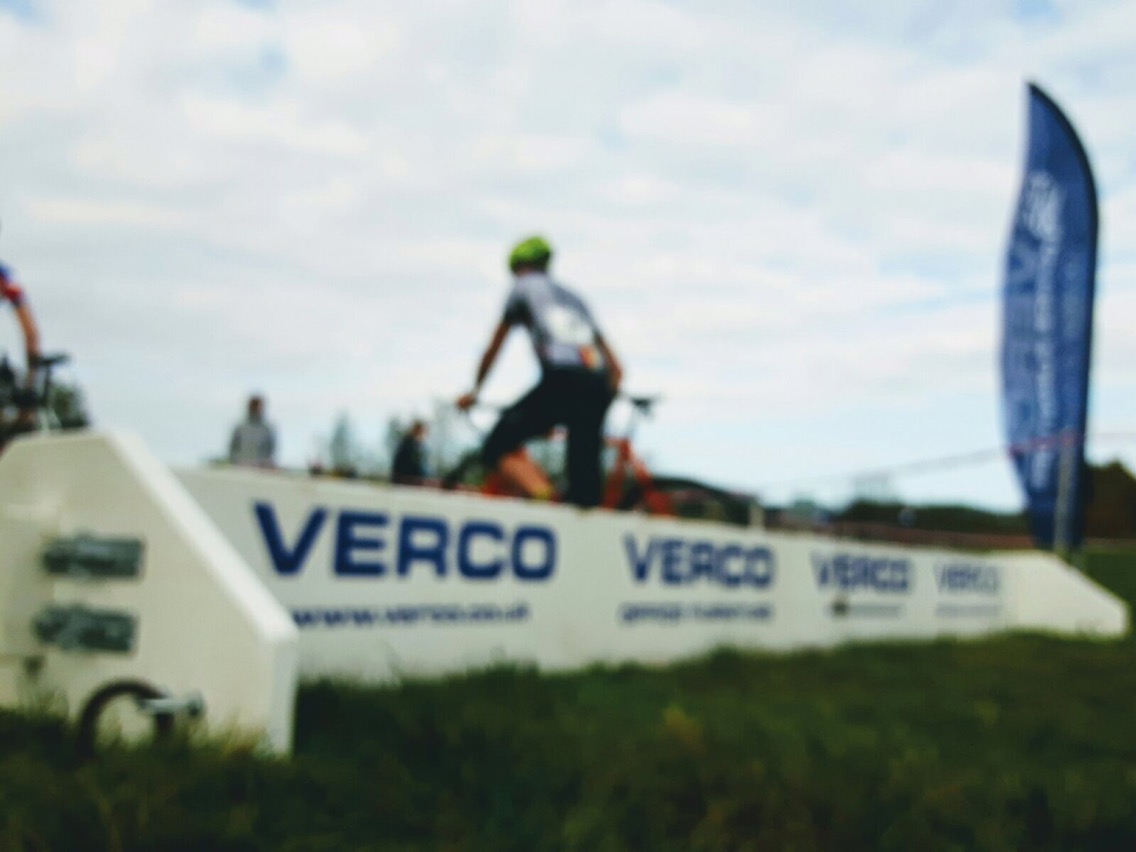 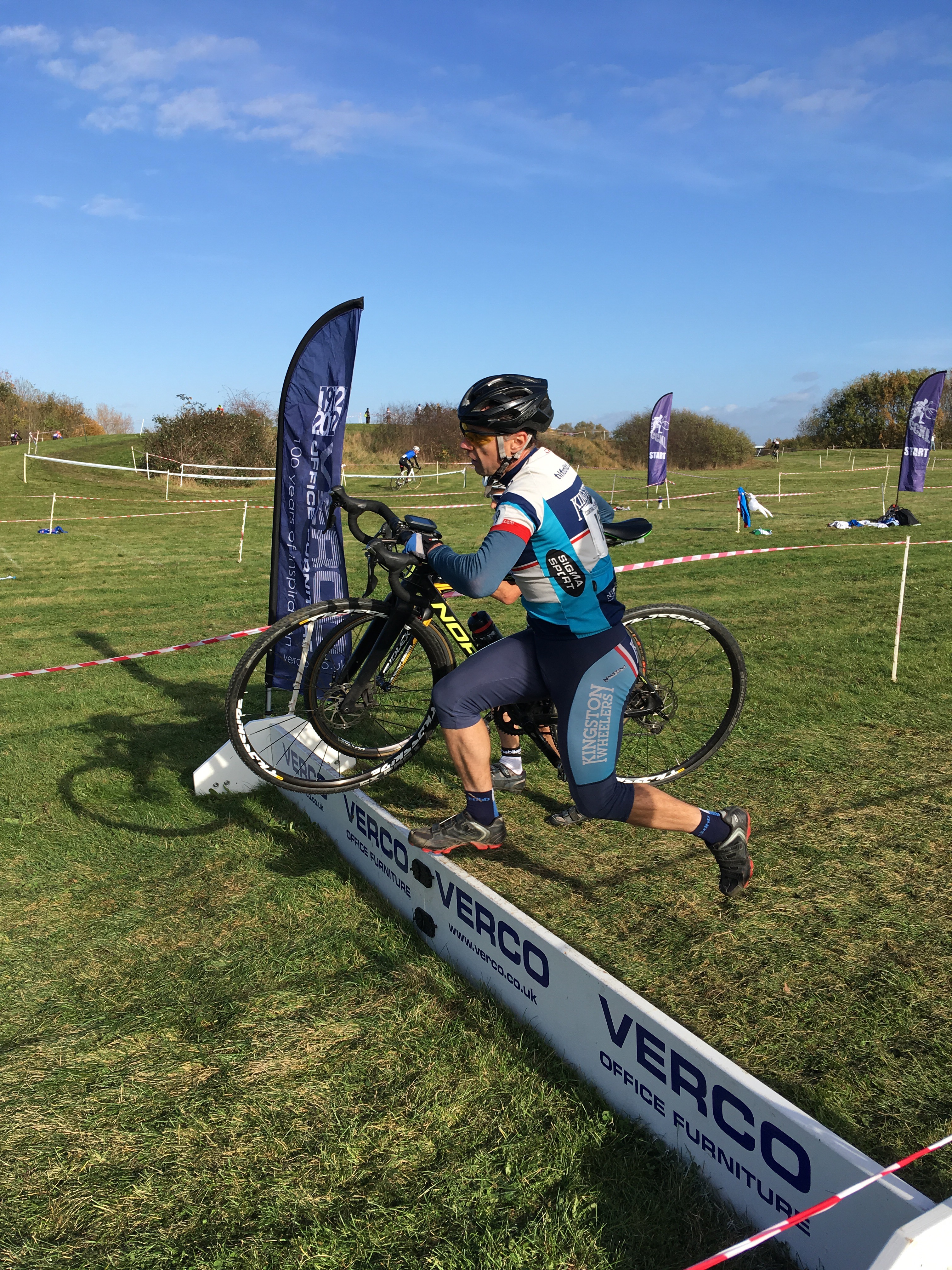 Also, a massive thanks to Molli for snapping happy on Sunday, if you see her supporting or riding, scream “COME ON MOLLI” at the top of your voice….we will reward you. (She won in Sunday BTW :O) 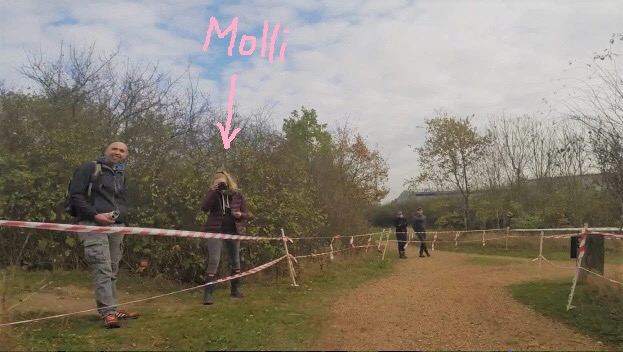 We also have a new edition and a friend to Dolly……Dolly’s evil older sister who’s clearly discovered Avon (and a natty extendable pole up her bum for stretching to those out of reach riders who need a pick me up) !! 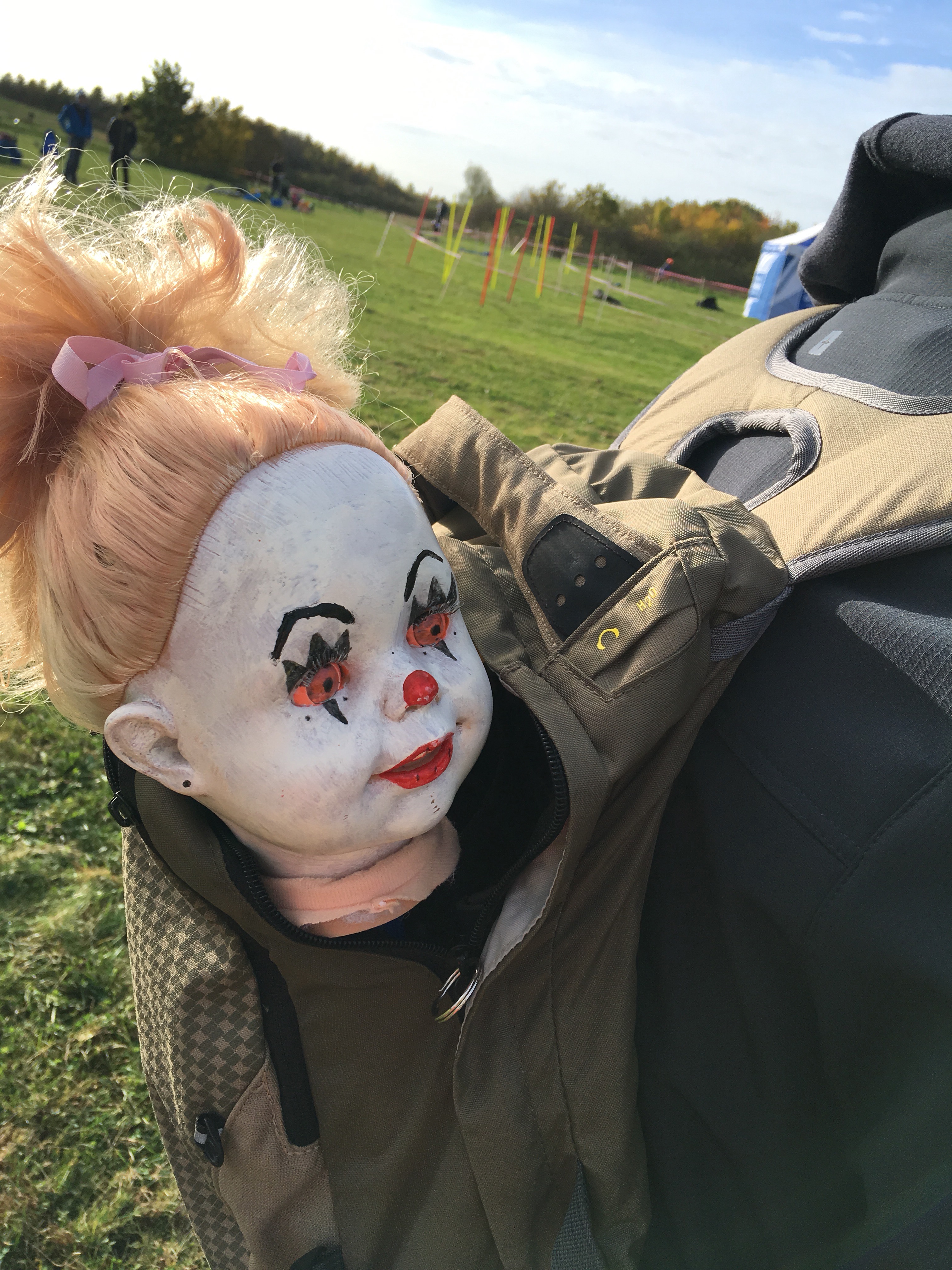 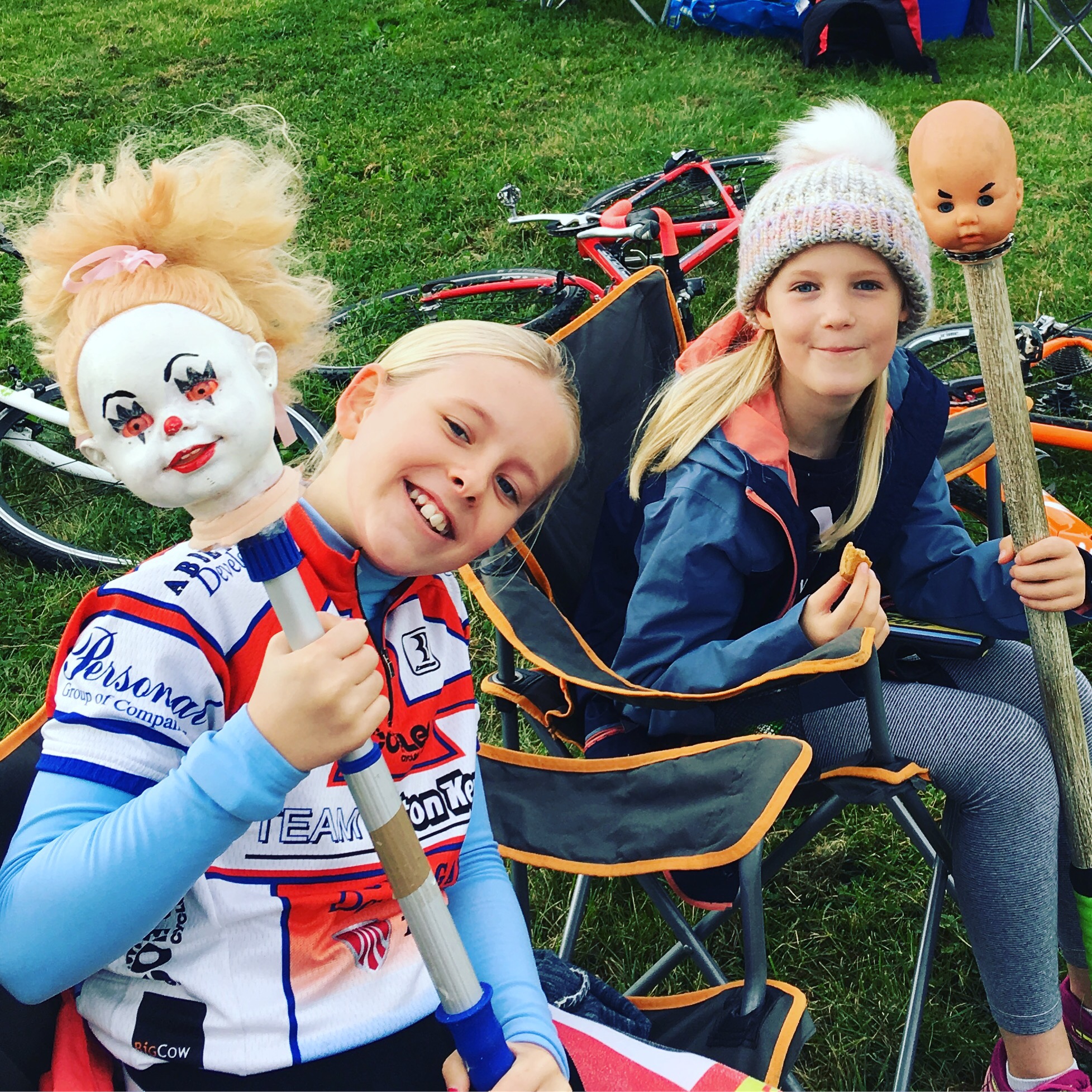