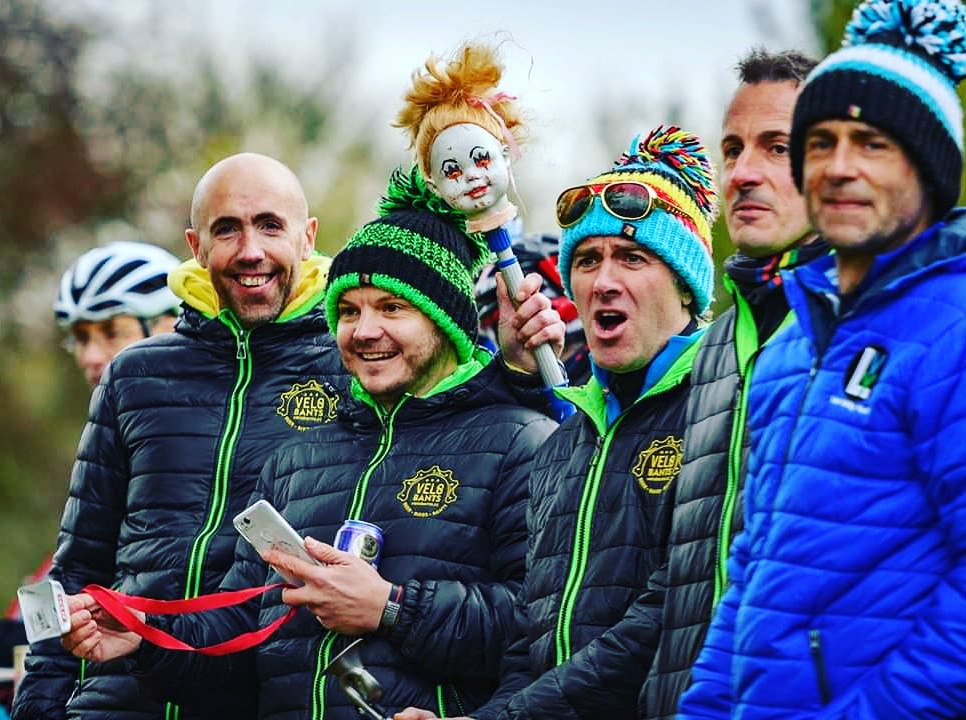 This week, In response to fan requests – Dolly’s back!!

Stepping into the unknown can be a little daunting for some but at VB Towers we were pretty excited to a race venue that was new to the league, something different, probably pretty tough knowing Icknield’s previous courses, but on a positive note it would see an end to all the animal gags on Facebook. [Ed -Alpaca my coat then…]

It was the standard routine on Sunday morning of loading the van;  jamming bikes / kids / gazebo / Redbull crates etc in and ensuring a strong coffee was in the CCXL-travelcup© before departing. We were a little short on the ground this week early doors, no not a cheap gag at Kev’s inside leg, it was just 2 VB racers in the van which meant only one thing……..we were hoping that the car park walk to the course wasn’t too far. The carts etc are not too bad, the three  12 foot long bike racks neither here nor there, but the new pop-up Gazebo is stupid heavy, the wheelie trolley is OK, but only if you’re dragging it on concrete. And you have 10 sherpas.

Our luck was in when we approached the course entrance to see if there was a cheeky off load point as Ray was right there…window down and as we started to put on the puppy sad face just about to deliver the speech of how hard it would be to carry all the stuff to the course blah blah blah……we were greeted with “Morning Velo Boys, do you want to drive in to the course to set up….” Errr YES !!! Thanks Ray, Ledge !!

We had prime pickings & choose the penultimate corner before the finish, saving an space adjacent for the High Wycombe Crew & prime real-estate for maximum footfall for the cake stall. Molli (off of the VB Youth Development Squad) had spent most of Friday / Sat baking, in the hope of selling the goodies to fund her trip to Borneo.

2 x VBers (always seems the rest of team conveniently arrive AFTER we have finished setting up base camp……) and the 2 small Thommos erected the pop-up in no time, sides zipped in, flags up all within about 15 mins. Slick. The FitzRobbos turned up shortly after, Dr Bants looking a little delicate, nursing the hangover from hell after a totes kray-krayTri awards night on the Erdinger shots. She inflated the “blue-foof” and made first claim on it for the day.

The Team VB entourage seems to grow weekly as do the ‘scuse me velobants can I leave my bag / child / keys / cuddly toy in there’ but it’s CX innnit so we duly oblige – this week we started a new Garry-off-biglensephotography collection service.

Phase 2 of race day is “the wait” which generally involves faffing, 62 nervous wees (for the record, we were nowhere near the Park Keepers house), saying ‘morning to familiar faces, trashtalking each other, debating the course, chatting to the early riders from reccy lap1 to get their views and this week also walking tall with this week’s new merch……the puffas.

Obvs we love them and based on the 6 requests of “where did you get them?” it seems like the BBHs now being everywhere in CCXL the puffa explosion is next. Poor Jonny M who loves to flirt with Team VB at the inter-mural TMK CX sessions actually nearly wee’d himself with excitement when he saw them.  He even decided not to race so he could put his £15 toward in his Team VB kit fund for his inevitable transfer in the off-season.

So how about the racing – or phase 3 of the day – first up was Small Tommo #1, from the looks of the pace of the U12s the course looked TOUGH, long uneven grass made the going super tough, but all the little fighters were digging in.

Next up was MolliMolliMolli Off of VBYDS, unfortunately 1 Lap was all she could muster after a heavy leg day at the gym the day prior and just couldn’t get the legs turning…..poor girl really has inherited her dad’s genes.

Then onto the blueribbon event, V40 men…..we were suited, booted, numbered ready for the siting lap. Tommo wasn’t happy as the track was quite narrow, busy and people were using it for a bit of a social rather than race pace….for most of us in VB we don’t see an issue with this; racing is the necessary evil in an otherwise social outing!

Popping out into the back field was a cool moment if you didn’t know the course went and this is where the course snaked down the hill then back up via some good switchies, then popped back in to the main field, past the pits and the hurdles, which were on a tight and short switch back (not sure if the Senior Skills Riders bunny hoped these this week?) then it dropped you back down into a 3rd field, back alongside the road, a few ups and downs and down probably the smoothest part of the course, to the last bend by VB Fan Zone and up to the finish line. By the time we got back from the sighting lap, it was within a few mins the whistle was blowing for gridding, yep the laps were going to be long.

Gridding was done and dusted with no issue with NikkiT on clip-board-shouty-duty #CBSD. Although this week she called our Kevvo “Keeeeeeyvan”, that’s a new one. The usual startline banter was in strong effect even before the whole pack sang Happy Birthday to Dan C! Then came the off. Tommo got a great start, taking PFitzP with him, the guy next to Tommo (and in front of Kevvo) clearly didn’t hear the whistle though and in a flash Pogo was up on his wheel. Little Eddy did the standard ‘apply brakes’ when whistle goes, this week waiting for Dan C and Mike M clearly keen to have a discussion about what Dan got for his birthday. As ever tho normal service and positioning was restored by the end of lap 1 for those guys.

The Minion Rush EV peloton certainly weren’t waiting around for Ed…..also good to see Simon Moss back racing. Chunky Pete got the late message about hanging back with Ed, Dan and Mike but after a few corners was on point and dropped back to join them. This is most confusing for most of us as you’re mind flicks between “wow there’s Chunky I’m doing really well!!” to “poor chunky must have stacked it to be back here with me”.

The likes of Andy Martin, Jacko etc were gone as the field hit actual Field 2 and the switchies. Poor Timmy off of Minion Rush had some kind of issue as he was being passed by the pits.

While Tomo and PFitzP were trading blows so were Kevvo and Adam off of our sister team TripleSport-Bants, a real tough course but no one ever said CX was meant to be easy and in hindisght it made for some great racing! With the racing done for the majority of Team VB the relieve was obvious and back at VB Fan Zone it was mech-up in jackets and get the banter on watching the remaining races…..well not until after Jase had checked the results. Of the 11:48 at Chepstow.

The V50s were up next, Fitzy was representing Team VB on his shiny new Trek Boone and matching blue shoes and helmet to the exact pantone! It was a great race for Fitzy, awesome high five swerves on VB corner and he was looking like he really enjoyed racing on the new weapon. Roy gave a master class, MTB guy was having a great battle with ex World Champ dude.

The yoofs the women’s races were next. Kate (Dr Bants) representing Teavm VB, and from the off you could tell the Corleys CX training the day before was paying off – that or the 6 redbulls she had to offset the hangover. Dr B steadily picked her way through the field as she does, pulling places out of hats like rabbits. A great battle was going on upfront between Charlotte H-M, Imogen, Adeline off of GVO, Lisa W and Fran, a battle that keeps on giving every round – we honestly love watching this race more than any other!  Another great turn out from Team MK; Lisa, Max, Debs, Jen, Nicole, Rachael and Jeni. Chrissie was around pre-race but like a few others in CCXL midseason injuries have kicked in and kept her out. The best result of all; Kate didn’t puke !

Katie Scotter was again making all the VB team uber jealous in the awesome Vicious Team kit…..we think our kit is good but my oh my, we literally swoon over the Viscious kit. Zoe A was getting it done and in a great battle with Connie H. A swift pre-race front wheel change from the VB pits saw Kirsty Bishop fly round the course courtesy of Kev’s spare rubber, we obvs feel we had a part to play in her success.  Good shout outs as usual to Team VB fans Gemma off of Lovelo, Gwen off of BRRRCRCRCCRRRCC (outright winner of bib tights of the day) & Roooof of off St.Ns with a particularly epic finish sprint! A slight mix up over the line for Good Vibes Adeline, saw the leader disappear and her swiftly remount…..a bit like Tommo vs Andy Martin in 2017 (ironically also at Icknield hosed round) but much cooler.

As always the seniors sign-off the day’s racing in CCXL, which is normally our cue to start packing up. ;o(

All in all a great day’s racing in our opinion, not a “riders” course but you know what, it was actually a great CX course, lumpy, long grass made it super tough, but as always its super tough for all.

Next up – Round 9 @ The Bowl hosted by Corleys, Saturday 17th November, obvs you can expect us to have something new in our merch / race supporting line up……it’s gonna be big….. 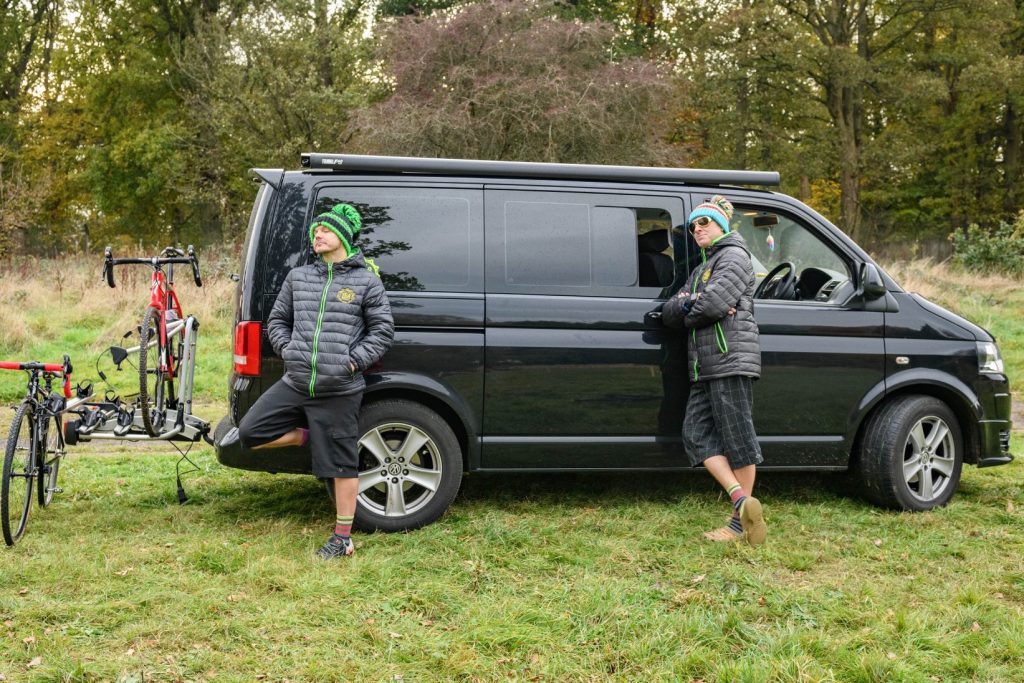 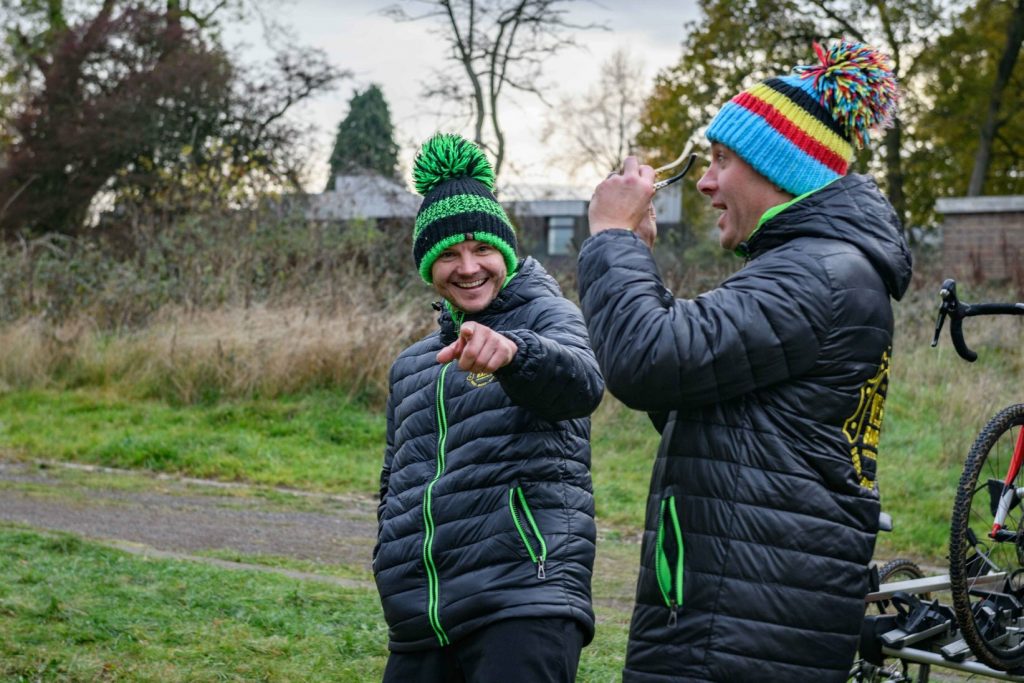 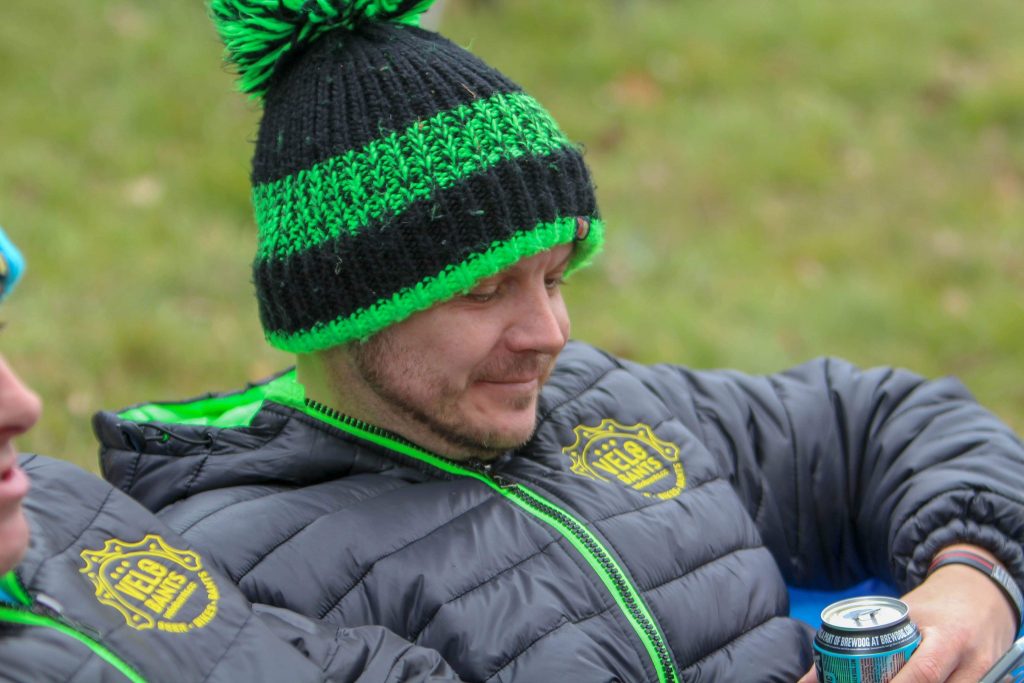 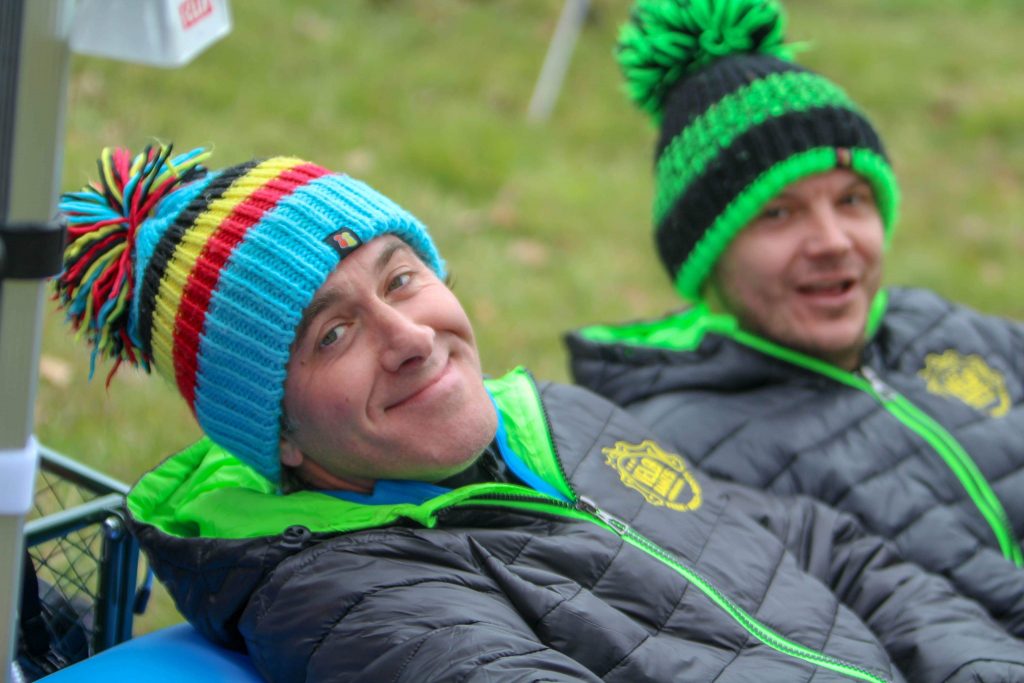 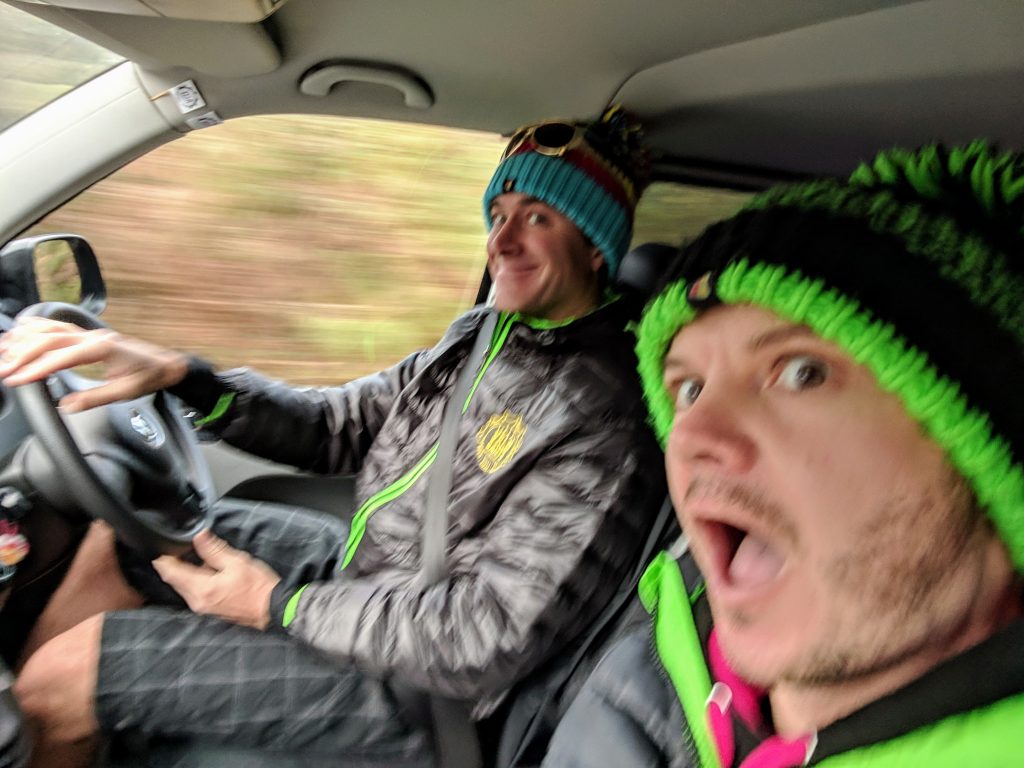